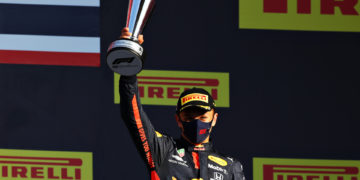 Albon can finally ‘breathe’ as he takes first podium

Albon can finally ‘breathe’ as he takes first podium 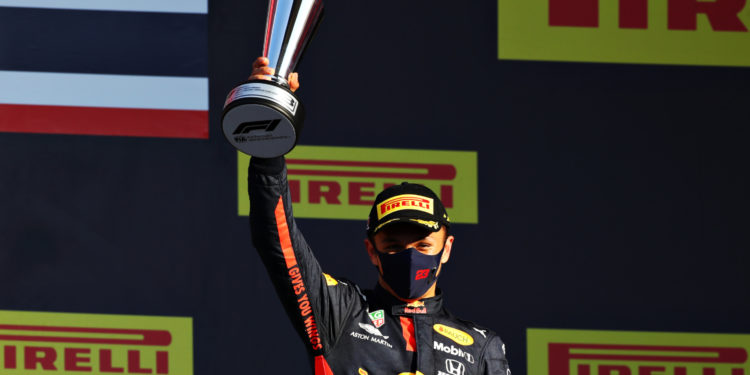 Tuscan Grand Prix – Alex Albon took his first Formula 1 podium at Mugello after fighting his way to third behind the two Mercedes.

Albon has previously been denied podium finishes in Brazil 2019 and Spielberg a couple of months ago after clashes with Lewis Hamilton. Today however, with Hamilton out front, Albon managed a clean race to become the first Thai driver to take a podium in Formula 1.

After securing his best result qualifying yesterday, Albon started from P4 and held the position up to the first red flag. The Red Bull driver fell back at the restart but put in the work and was chasing down Lance Stroll’s fourth place before the Racing Point driver had an incident which called out the second red flag of the day.

The third and final Tuscan Grand Prix restart saw Albon back in P4 and then close in on Daniel Ricciardo’s Renault before passing and then holding the podium position until the end. On his slowdown lap, the Thai driver thanked his team for their support: “Thank you everyone, thanks for everything. Thanks for sticking with me.”

Albon seemed equal parts happy and relieved with the result post race and said while the car wasn’t the best off the line, it does lend itself to overtakes on track. “It was good,” Albon said. “It was obviously a while to get here. It was a tough one as well, we had to work for it. I’m really happy. I can breathe. It feels nice to be here.”

“We just couldn’t get off the line so most of the overtakes had to be done on the circuit. Our car is good on the brakes, we’ve known that since day one, so we can do moves like that and it’s fun to drive.”

Albon had been expecting the race to be more demanding but with the stoppages, it made life easier. “{Physically] it was surprisingly okay. I was expecting it to be worse but we did have two red flags though, that did help it. It is brutal, especially the high speed in sector two, you feel it, otherwise I think there was more adrenaline going into my body than anything else.”