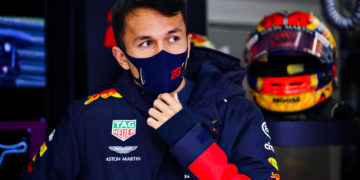 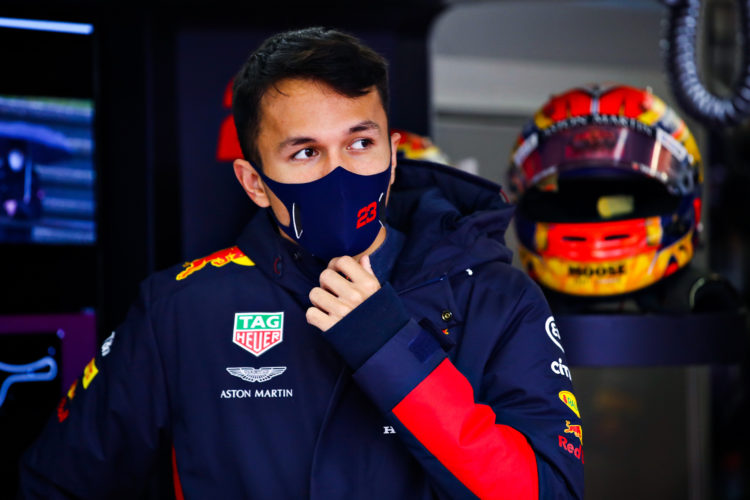 NUERBURG, GERMANY - OCTOBER 09: Alexander Albon of Thailand and Red Bull Racing looks on from the garage during practice ahead of the F1 Eifel Grand Prix at Nuerburgring on October 09, 2020 in Nuerburg, Germany. (Photo by Mark Thompson/Getty Images) // Getty Images / Red Bull Content Pool // SI202010090085 // Usage for editorial use only //

Eifel Grand Prix – Red Bull’s Alex Albon has been given two penalty points for clashing with Daniil Kvyat during the race at the Nurburgring.

Alex Albon retired on Lap 24 of the Eifel Grand Prix, after the team spotted a power unit issue on his car that forced them to pit him.

This was shortly after Albon was given a five second time penalty for causing a collision with Alpha Tauri’s Daniil Kvyat. Albon had been pressuring the Russian driver for P11 when Kvyat missed his braking point for the chicane. Running wide and rejoining the track, Albon was free to power past Kvyat but moved over too early. This shattered the front wing of the Alpha Tauri at the exact worst point on the track as he couldn’t dive into the pits so late.

Kvyat was forced to do a lap with no front wing to get back for repairs, while Albon continued without any apparent damage before being given the penalty.

According to the stewards, Albon was to blame for the clash and awarded him two penalty points along with his time penalty. He is now on seven penalty points in total, with twelve points triggering a race ban.

“Car 26 [Kvyat] missed the apex of Turn 14 and re-joined the track. After that, Car 23 [Albon] passed car 26, moved to the left and clipped the front wing of Car 26. This contact forced Car 26 into the pits to replace the front wing.”

Daniil Kvyat wasn’t happy with Albon afterwards, saying: “Not a good one today, my race was pretty much ruined from the moment I had contact with Albon. I don’t know what he wanted to do but as a result, I lost my front wing and the car was massively damaged on the floor and brake ducts.”

“I lost so much time doing that slow lap to the pits without a front wing, then the pit stop was obviously slow to replace it, so there wasn’t much I could do afterwards.” continued Kvyat. “The car was missing a lot of downforce, so I struggled for the rest of the race. I was just hoping for some rain or something to happen to be able to catch up, but nothing happened. It’s a shame because until that incident with Albon it really looked like it could have been a very strong race, I think we could have done well today.”