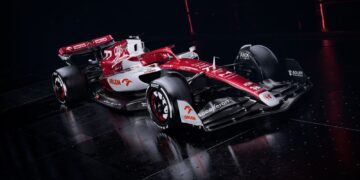 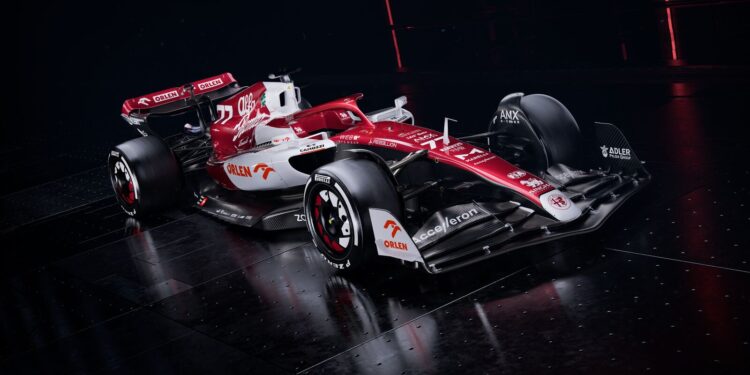 After spending the Barcelona test in special camouflage colours, Alfa Romeo have now revealed their look for the 2022 season.

The Alfa Romeo F1 Team Orlen have continued with the red and white of previous seasons but this time have been more liberal with their scarlet paintbrush and the car looks all the better for it.

“I love it,” Valtteri Bottas said of the new livery. “For me it’s love at first sight. It’s a special feeling but honestly when I saw it for the first time, especially when you see it live, it’s really stunning and we’ll be very proud representing these colours this season.

“It’s my first car at Alfa Romeo F1 Team Orlen, of course, which makes it special, and I am really looking forward to being on the grid in Bahrain with it. What is exciting is that we have no idea how that first race is going to pan out.

“Testing helped us confirm our expectations of where we stand, the progress we have made with the car, but now we are getting closer to the moment that really matters. Since I joined, I have seen so much motivation within this team: everyone is pushing a lot, trying to work harder than the others to be competitive, and that in turn gives me that extra boost when I am in the cockpit.”

Alfa Romeo didn’t have the smoothest time during the test with reliability issues hitting the team on each of the three days but the team has a few weeks to try and resolve them before the second test takes place in Bahrain, with the season opener a week later.

At the livery launch Team Principal, Frederic Vasseur, said that while Barcelona was difficult he had the “utmost confidence” that the C42 was the car to see Alfa Romeo move up the grid.

“It was quite a difficult session that we had to face [in Barcelona],” said Vasseur. “With the bouncing and then we had some mechanical issues but now we have to think and be focused on the next one but we are trying to fix everything for Bahrain.

“The start of the season is always an exciting time, one in which we see the fruit of the work of hundreds of people over a long period of time. The C42 is a car we look forward to seeing racing, not just because it is the first we built in this new regulations cycle, one in which racing should be closer and more thrilling, but because we have the utmost confidence in this car helping the team make a big step forward towards the front of the grid.”

Heading into his first season as an F1 driver, and as the first Chinese driver, Zhou Guanyu is really looking forward to getting onto the grid.

“I am fully pumped up for the season,” Zhou said. “And seeing the C42 in the livery in which I will race it definitely makes it real. We are at the beginning of a new era, with new cars and new regulations, and this creates an opportunity for all teams to make progress since we are all starting from scratch.

“Everyone at Alfa Romeo F1 Team Orlen has been incredibly helpful since I joined and seeing all the hard work, the commitment and motivation from everyone, in Hinwil and at the track, fills me with pride and excitement. I can’t wait to be on the grid with this car and work with my team to bring home the results we are targeting together.”

Heading into his third year as Alfa Romeo’s reserve driver, Robert Kubica, who admired the car’s Polish white and red colouring but said while “it looks good, it has to ride even better.”

With the unknown of the new regulations the Pole knows that his development work on the car is going to be even more crucial than previous years and is looking forward to helping the team improve.

“The start of a new season is always a time where expectations, hopes and plans come together,” Kubica continued. “This year, the stakes are even higher as we are taking a bit of a jump into the unknown with the new regulations. There has been an incredible amount of work that went into this car, the C42, and I am looking forward to seeing what the team can achieve with it.

“In my role, I am aiming to provide as much help as possible in the development of this car: we know how big the margins of improvement are at this stage in the lifetime of a car and we know that each upgrade can make a difference, so the work we do back at base is going to be crucial to deliver results trackside.”