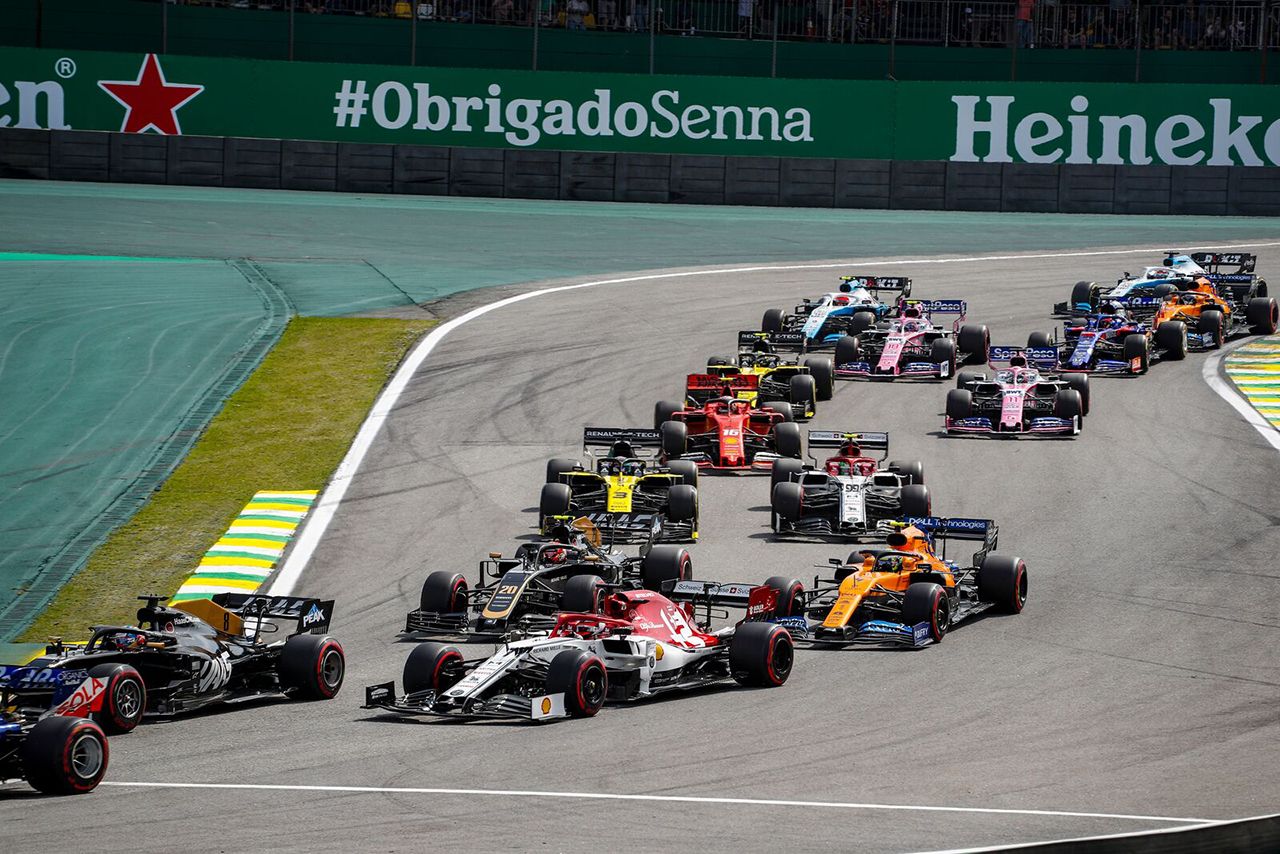 Alfa Romeo scored their best result of the season in the Brazilian Grand Prix as Kimi Raikkonen and Antonio Giovinazzi finished P4 and P5 respectively. Amidst all the chaos of the closing quarter of the race, Alfa’s faith in their own strategy proved crucial as they moved up the order as incidents affected drivers in front of them.

Raikkonen and Giovinazzi had been close together on track throughout the race, both running an identical strategy of Soft/Medium/Soft on a two stop strategy. The pair looked good for a lower double points finish, but their fortunes improved further when the Safety Car came out to cover off the recovery of Valtteri Bottas’ stricken Mercedes.

With Bottas, the two Ferraris, and Alex Albon’s Red Bull all suffering mishaps in the closing stages, Raikkonen and Giovinazzi moved up to finish in fifth and sixth places respectively. However, a post-race time penalty was handed to Lewis Hamilton. This five second drop demoted him to P7, and moved the Alfa drivers up a position each.

Raikkonen thus finished in P4, less than a second behind third-placed Carlos Sainz and just missing out on the podium as a result. Giovinazzi, in turn, was less than a second behind Raikkonen. This result is Alfa Romeo’s best team result since their return to F1, and the best for the Sauber team since they finished in the same positions at the Belgian Grand Prix in 2004.

The team’s 22 point haul was the second highest of the day, with Red Bull the only team outscoring them by taking 25 points with Max Verstappen’s race victory. It’s a welcome return to points for Alfa, who have had a barren streak since finishing P10 with Giovinazzi in Singapore. They now move to 57 points in the constructor’s table, ten points behind Racing Point with one race remaining.

“It’s great to finally be able to celebrate our best result of the season as a team.” said Raikkonen after taking his best result of the year. “It was a positive day and finally we were able to get the result we worked so hard for. We kept on our own most of the race, but at the end we were in the middle of the action. I am disappointed we couldn’t get past Sainz for what turned out to be the final podium position: we had the speed, got a good run on him twice but couldn’t get past. But you always want something more: in the end, it’s good to get big points with both cars.”

Giovinazzi kept his teammate honest throughout the entire race, and couldn’t help himself from beaming as he scored his best result shortly after being confirmed as staying with the team for his second year in F1 in 2020.

“I am really, really happy today, for both myself and the team.” Giovinazzi said. “What a great race, it was a fantastic way to celebrate my contract for next year with two cars in the points. We had a great start, the best this year – we made up three places and went straight into the top ten, but we still had a lot of work to do. The strategy was great, the restarts were very important, especially the final one when I was under pressure from Daniel [Ricciardo]. The last ten laps were crazy, it was quite intense but we managed to stay ahead. Everyone in the team did a wonderful job and we can be really happy with our work. We are improving race after race and we can now focus on Abu Dhabi and on finishing the season in the right way.”

Alfa team boss Frederic Vasseur said there was no key moment that changed the team’s fortunes, as mishaps happened for other drivers around them: “We can be really happy and proud with this result. To bring two cars in the points just outside the podium is the reward for the hard work of everyone in the team. We didn’t let our head drop in the races where we were unlucky and now we can celebrate our best result of the season. There was no defining factor today: everyone did a great job – in the cockpit, in the pitstops, on the pitwall and back at base. We have made a lot of progress in the last few races, but it wasn’t until today that it showed. Now we can look forward to the chance to do another good race in Abu Dhabi and finish the season on a high.”