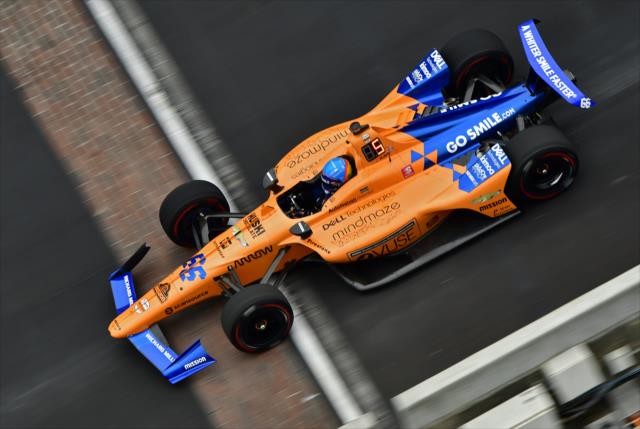 Fernando Alonso has been unable to qualify for the 2019 Indy 500 after failing to make the cut in the six-driver Last Row shootout.

After struggling on day one of qualifying, Alonso was one of the slowest six drivers who had to participate in a shootout to line-up on the last row of the grid.

The six-car contest was delayed due to rain but, after delays, all six cars were able to set times, along with Alonso, whose car had wholesale changes in a bid to find pace and qualify for the event.

With drivers only allowed onto the track one at a time. In the running order, Alonso was the third of six drivers to attempt to qualify, setting a four-lap average of 227.353 mph and provisionally going second behind James Hinchcliffe and ahead of Max Chilton.

Sage Karam then set a faster average speed than any other driver, dropping Alonso to third out of the six drivers, setting up a nervy final few minutes for the McLaren team.

Patricio O’Ward failed to break into the top three, but Kyle Kaiser managed to pip the McLaren and take third and the final place on the back row of the 2019 Indy 500 grid.

The two-time F1 champion has endured a difficult second attempt at the Indy 500. McLaren have struggled to extract pace from the car and the team were set back by a big crash for Alonso earlier in the week.