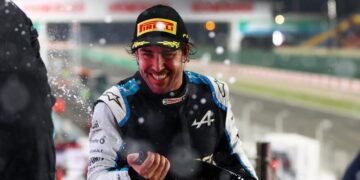 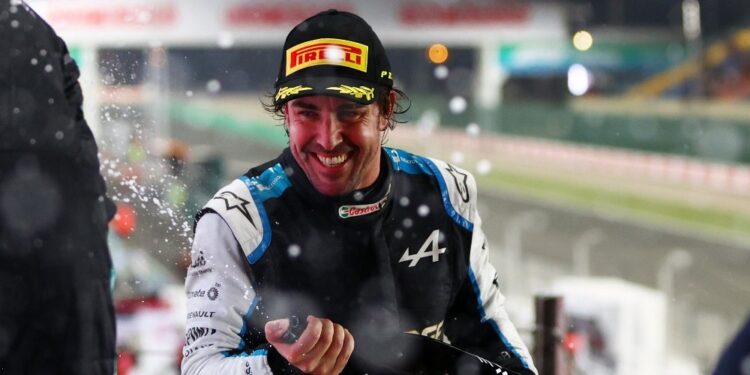 Qatar Grand Prix – Fernando Alonso made a welcome return to the podium today after making his tyres last on a one-stop strategy to finish P3.

After putting in his best qualifying performance of the season, a P5, yesterday, Alonso lined up for today’s Grand Prix in P3 thanks to penalties for Max Verstappen and Valtteri Bottas. While he wasn’t able to achieve his aim of leading after the start he had got past Pierre Gasly and was able to enjoy P2 until Verstappen got through a few laps later.

The Spaniard’s return to the podium was helped by Alpine’s bold one-stop strategy not literally blowing up on him as it did for Valtteri Bottas and both Williams drivers, and a late Virtual Safety Car to clear Nicholas Latifi’s stricken car stopped Sergio Perez’ charge back to the podium.

“Unbelievable,” Alonso said afterwards. “Seven years, but finally we got it. We were close a couple of races but not enough. Sochi was the last possibility. Honestly I thought to be leading after lap one. With the red tyre I thought I could have a go and risk, but I couldn’t.”

Alpine had headed into the race with a one-stop planned and despite seeing four punctures from worn tyres, persisted with the strategy rather than pitting again and relinquishing their hold on the final podium spot.

“It seems that our car is kind on tyres. We did one-stop also in Brazil last week and today I think we had some margin to keep pushing a little bit more, but you never know.

“We planned one stop from the beginning but we never knew how bad was the wear and the degradation. It’s a new race for everybody. But I think it was quite well executed, the race. The pit stop was fantastic. The team was great. The reliability of the car was superb and they deserve it.

“With Checo it was very close at the end. But so happy for the team. Also, Esteban P5. A good Sunday.”

As Alonso did his part in holding rivals back to help Esteban Ocon secure his and Alpine’s first win back in Hungary, the Frenchman did his best to hold off a fresher-tyred Perez and that, coupled with the Virtual Safety Car, was enough to seal Alpine’s second podium of the year.

“It’s like a win for us,” said Ocon. “I’m so glad to see Fernando on the podium. He has driven to the ultimate excellence as he always does. I also tried to give back a little bit what Fernando gave me from Budapest, I slowed down a good 2.5, 3 seconds Sergio in that lap, so I was hoping that was going to be enough and it was.”

Despite being unsure of whether Alpine can continue to perform well at the final two tracks, Alonso was unsurprisingly looking on the bright side after such his unexpected success in Qatar.

“It’s going to depend on the track layout and the characteristics of the track,” Alonso concluded. “Saudi, what we see on the videos, it could match our package; Abu Dhabi maybe a little bit less, even though the new corners may change a little bit what we feel there. I don’t know, I feel positive. I feel that what I saw this weekend on the car made me quite optimistic for the next two.

“But we cannot relax. Anything can happen on the next two events, and we need to keep the focus high and hopefully deliver more points for the Championship.”