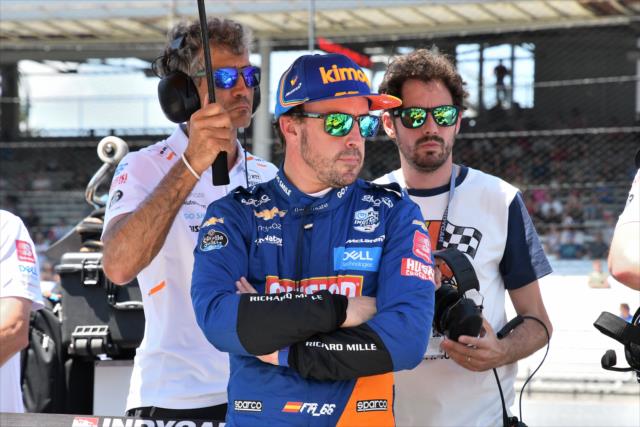 After failing to make the top 30 in qualifying, Fernando Alonso will be one of six drivers who must contest a ‘Last Row Shootout’ to attempt to qualify for the 2019 Indianapolis 500.

The two-time Formula One champion could face the prospect of failing to qualify for the 2019 Indy 500 after failing to break through into the top 30 during Saturday’s main qualifying session.

Of the 36 drivers, the top 30 automatically progress into the Indy 500, whilst the final six drivers will participate in a Last Row shootout, from which three drivers will qualify for the back row of the grid, bringing the total number of participants up to 33.

With driver’s qualifying positions being determined by a four-lap average speed, Alonso’s average pace of 227.224 mph was not enough to see him through, and he was edged out in the final stages of qualifying.

The qualifying session was topped by Spencer Pigot, and the top nine drivers will participate in a ‘Fast Nine’ shootout to determine the starting grid positions for the fastest nine drivers. The Fast Nine also includes ex-F1 drivers Alexander Rossi (a former Indy 500 winner) and Sebastien Bourdais.

It’s Alonso’s latest setback in what has been a difficult week for the #66 McLaren, with the team struggling for pace and being set back by a big crash for Alonso earlier in the week.

Speaking after qualifying, Alonso said that whilst the team didn’t have the pace, they must not panic and focus ahead of their final chance in qualifying.

“We were running quite well this morning when the conditions were not too bad, but unfortunately, we picked up a rear puncture and then we decided to wait until this afternoon to get back out on track when track conditions were slightly better.

“At the end of the day, we didn’t have the pace and the final time we posted wasn’t enough to be in the top 30, so we must try again tomorrow and we’ll need to execute the four laps as well as possible, clean and with no mistakes.

“It’s a difficult moment for the team, but we must remain calm and focused and I hope we can find enough to make the top three positions of the six tomorrow.”