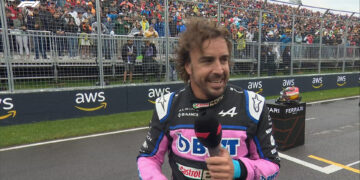 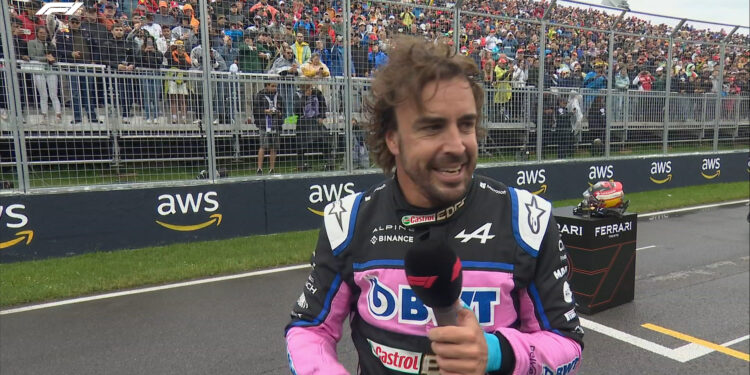 Canadian Grand Prix – After a very strong showing in wet conditions on Saturday, Fernando Alonso is looking to make the most of his P2 starting position.

The two-time champion showed great pace even in the dry conditions on Friday but he, and his Alpine, really came alive once the rain set in yesterday for the final practice and qualifying sessions.

With the rain easing off for qualifying, and the conditions changing from full wet conditions to intermediate and almost slick territory by the pole position shootout, there was more time to be gained on every lap and the Spaniard just managed to get the best of his compatriot, Carlos Sainz, to slot into P2 to set up his first front row start since 2012.

“It’s a surprise for sure,” Alonso said after qualifying. “Yesterday was fast, but we’ve found sometimes we have a very fast car on Fridays and not on Saturdays, so we were not really excited about the performance yesterday. But today after being P1 in FP3, we were like, okay, so if it keeps raining for qualifying it could be a good Saturday. And it was.”

While Alonso does want to go for broke and shake things up at the start of the Grand Prix, especially given that as he isn’t in the championship fight, he can take more risks than the drivers around him.

“Well, the goal is to lead the race in Lap 1. So that’s Turn 1, maximum attack. And then after that, they can go and they can fight. But it would be nice, sweet, to lead the race. I think it’s going to be difficult to hold the pack behind but we did in Baku, one week ago, so we’ll try to make our car very wide tomorrow.”

Aside from wanting the joy of fighting for P1 and leading the race, Alonso knows that Alpine aren’t on the same level as the top two teams this season so fifth is the highest realistic goal to aim for in the race.

“Realistically I would say top five is what we should fight for. We have a very good starting position, but we know our limitations and we saw in many races already that Ferrari or Red Bull are starting last or having a puncture in Lap 1 or whatever, they still finish with a good margin in front of us. So I think the top four places are locked. So fifth is like a win for us and that’s probably the spot would should aim for.”