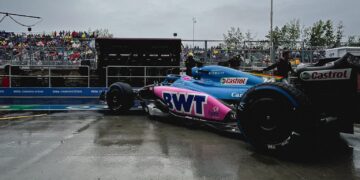 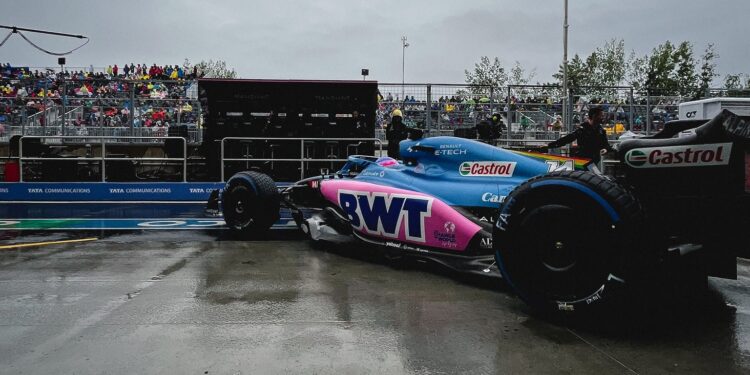 Canadian Grand Prix – Fernando Alonso put the intermediate tyres to good use as he ended FP3 ahead of Pierre Gasly and Sebastian Vettel.

While the Friday practices had dark clouds threatening at different points they were completed without any rain, the final practice session of the weekend however had the clouds and the rain in full swing as the track went live.

Kevin Magnussen’s Haas was the first to venture out to demonstrate just how wet the on-track conditions were. The Alfa Romeos each completed an outlap before retreating to the garages but the Haas cars continued circulating and Magnussen put the first timed lap on the board, a 1:43.014. While other drivers did head out, it was only the Aston Martins and Yuki Tsunoda who stuck it out long enough to set a time in the opening ten or so minutes.

With a quarter of the session completed, there were six drivers who had posted laps, Lando Norris having joined the early runners, and Sebastian Vettel had brought the fastest time down to a 1:39.041.

Halfway through the session Carlos Sainz was the new holder of the fastest time with a 1:35.858. At that stage there had been fourteen drivers who had set times and all but Max Verstappen and George Russell had completed at least an outlap. With the rain still coming down there had been many twitchy moments, off-track excursions and yellow flags but everyone had managed to keep their cars out of the barriers.

Russell and Verstappen made their first appearances with must over twenty-five minutes left of the session, the Mercedes driver set a time but the Red Bull racer returned to the pits without completing one of his own so with twenty minutes on the clock it was only him, Sergio Perez and Charles Leclerc who were time less.

With fifteen minutes to go, intermediate tyres were being tried out and Fernando Alonso, the earliest to give them a go, shaved the best time down to a 1:34.229.

With just over six minutes to go, Magnussen straight-lined the first corner but just managed to keep the nose of his Haas out of the barriers at turn two, a bit of awkward reversing across the track later, and the Dane was back facing the right way and the yellow flags removed, for a few minutes at least as with the majority of cars on track, yellow flags were coming in and out with great regularity.

The last few minutes of the sessions saw a flurry of faster laps as the timing screens were constantly changing due to the times being set. It ended though with a 1:33.836 from Alonso as the best of the practice though he was very closely followed by Gasly and Vettel. The AlphaTauri driver 0.053 seconds slower while the four-time champion’s best was only 0.002 further back.

Esteban Ocon slotted into P4 with a 1:34.003 with the two McLarens line astern behind in P5 and P6. Daniel Ricciardo 0.274 off Alonso’s time with Norris a tenth back. Russell was the better of the Mercedes in P7 ahead of the Red Bulls. Perez with a 1:34.498 and Verstappen in P9. With Alonso in P1, the top ten was bookmarked the other Spaniard with Sainz in P10, as the final driver to set a time within a second of the Alpine driver.