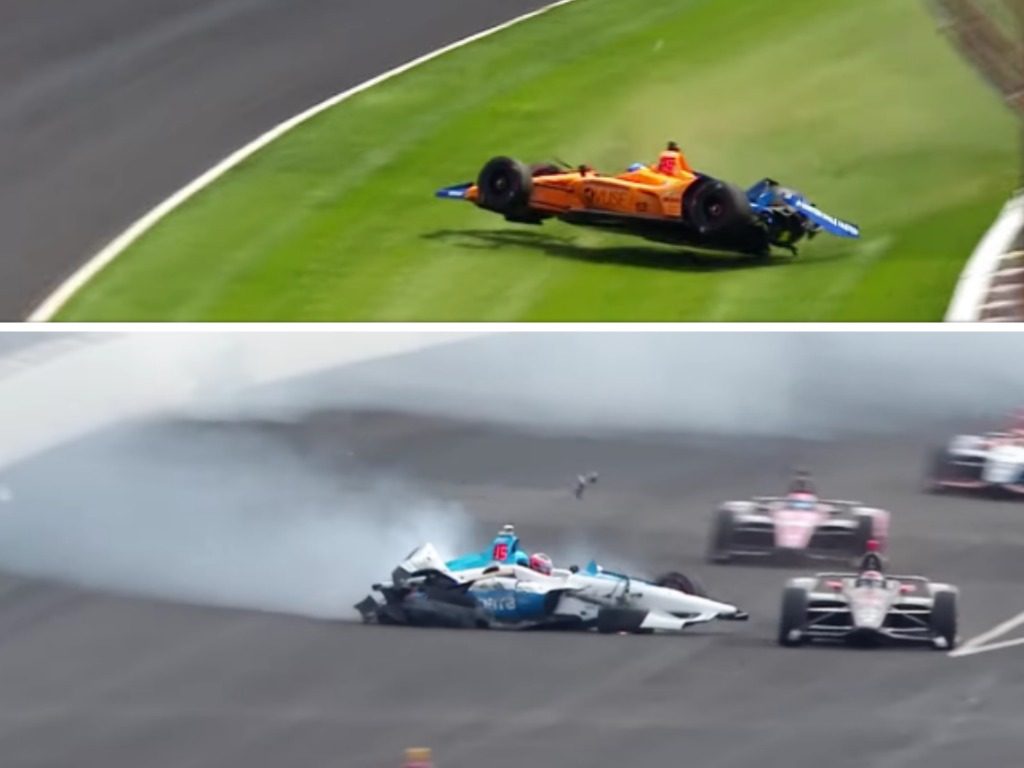 Both Fernando Alonso & Felix Rosenqvist have walked away from separate high speed accidents at the Indianapolis Motor Speedway.

Practice for the Indianapolis 500 is now well underway ahead of the 103rd running of the event on the 26th May. Wednesday was Day 2 of action, but the day was to end prematurely for two high profile drivers.

Fernando Alonso, taking part in the event for the second time after his 2017 attempt with McLaren, is chasing the Triple Crown of Motorsport by going after the win this year. However, his preparation has now taken a hit as he crashed his car leaving Turn 3 early in the morning runs. He was uninjured and clambered free of the car, but McLaren have now needed to swap him to a spare chassis as a result of the damage.

“It was pure understeer on the car.” explained Alonso after he left the medical centre after a check up. “Even if I lifted the throttle on entry, it wasn’t enough. I lost the front aero and the wall just came too close and too quickly. Unfortunately it happened today and we lose some running time. I’m really sorry for the team but we will learn and come back stronger tomorrow.”

Here’s the moment @alo_oficial hit the wall during #Indy500 practice 😮

Former Formula E Mahindra driver Felix Rosenqvist, who left the series a few months ago in order to concentrate on his new IndyCar duties with Chip Ganassi Racing, also lost control of his car on the banks of Indianapolis. He was lucky to avoid contact with other cars as he speared across the track but, like Alonso, escaped injury.

“I was behind Colton [Herta] and I was trying to run the car in traffic. Suddenly I felt a big change all of a sudden and it got loose very fast. I couldn’t react to it but luckily my team has built a really good, really safe car. I’m not really sure what happened and we need to analyse it. I’m not sure if I was down on the kerb. It looks as though I could have been up a little bit and that probably explains it. I can’t really remember. A shame, but that’s how it is.”

Another big hit during #Indy500 practice, but @FRosenqvist has been checked, cleared and released from the @IMS infield medical center 🙌#INDYCAR // #ThisIsMay pic.twitter.com/MoG7o1Ce1C