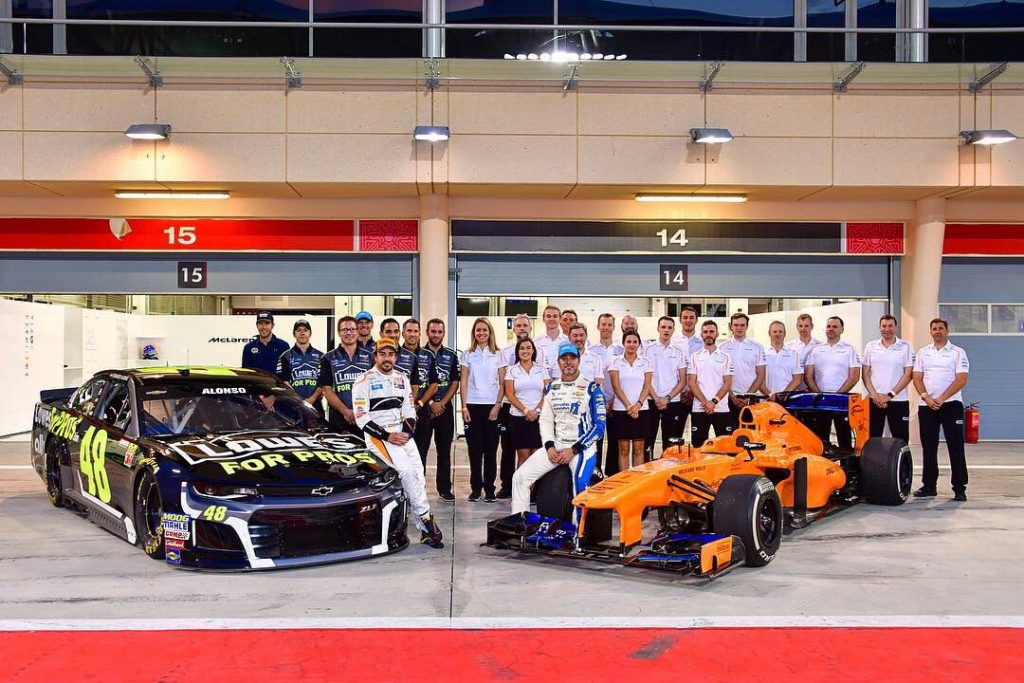 Alonso tries out a NASCAR in Bahrain

Alonso tries out a NASCAR in Bahrain

Fernando Alonso has tested a NASCAR out at the Sakhir International Circuit as he and NASCAR champion Jimmie Johnson swapped seats for the day.

Fresh from his P11 finish at the Abu Dhabi Grand Prix, Alonso flew to Bahrain on Monday for a planned promotional day at Bahrain’s Sakhir Circuit.

With both Champions waiting in the garage, the two cars were wheeled out: a NASCAR Chevrolet Camaro ZL1 for Hendrick Motorsports, and McLaren’s 2013 MP4/28.

Both Alonso & Johnson put in banker laps in their machinery before swapping over for sighter laps and, eventually, going for balls-out runs in unfamiliar cars.

According to F1 Racing’s James Roberts at the scene, Jimmie Johnson’s best NASCAR lap benchmark around Bahrain was a 2m 14.683s. According to a pitwall stopwatch, Alonso set a time of 2m 15.8s.

No times for the F1 runs have yet been released.

Taking to Twitter, Johnson said that the G-forces in an F1 car caught him by surprise. Despite his experience with high-speed machinery in NASCAR, most of this lateral G-Force comes from turning continuously left and is ‘only’ around 3G (3 times force of gravity). Alonso, by comparison, is used to around 6G and in both directions. This will also apply under braking, as the NASCAR requires around 6-8 times a greater stopping distance than the McLaren.

“The braking point is so late in F1, it’s insane.” Johnson said. “The G Forces from hitting the brakes so hard actually make your eyes lose focus and vision go blurry. Unreal feeling”

For now, a swap to NASCAR for Fernando Alonso is unlikely although he may have an option to appear at a one-off event as his ties with the United States racing scene increase. His 2019 plans already include the Indy 500, which he will contest with McLaren.

And it’s @JimmieJohnson’s turn to get involved in the car swap as he takes to the track in the McLaren. 👍 #JJxALO pic.twitter.com/vJKeleff2v

Something tells us that these guys are having a good time. 😄 #JJxALO pic.twitter.com/mXAMQ1UByn

Jimmie Johnson’s best NASCAR lap benchmark around Bahrain is 2m 14.683s. According to a pitwall stopwatch, @alo_oficial set a time of 2m 15.8s. Don’t think he cut the chicane either! 😂Impressive stuff! pic.twitter.com/DA8Q5l1tnB