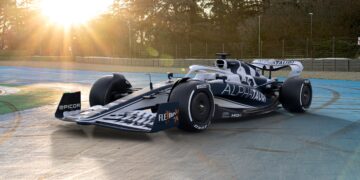 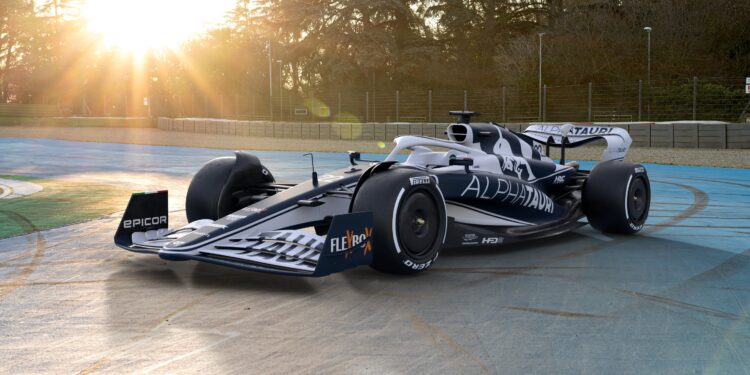 AlphaTauri became the latest Formula 1 team to have a 2022 car launch as they showed their AT03 car to the world this morning.

The Italian team showcased their take on what a car should look like under the new regulations and covered it with a new variation of their usual navy blue and white livery.

Team Principal, Franz Tost, is hoping that the rule changes will make the grid more competitive but said that while the tests will give them an indication of where everyone stands, the full picture won’t emerge until after a few races.

“Although everything is quite restricted by the regulations,” said Tost. “It’s possible that one team has found a very special solution and will therefore have a performance advantage. It’s not easy to estimate where the teams will be because everything is new, from the mechanical to the aerodynamic side, but I personally hope that the cars will be closer together.

“Realistically, we will only have an idea of how well Scuderia AlphaTauri will perform after the first tests, and we’ll have to wait until after the first two or three races to have a better picture.”

The driver line-up remains unchanged from last season with Pierre Gasly and Yuki Tsunoda behind the wheels, a pairing that Tost is very happy to see continue.

“I’m very pleased with this driver line-up,” added Tost. “Pierre is a fantastic driver and if we provide him with a really good car, he has shown he is able to win races and finish on the podium. Yuki is a very high-skilled driver and on several occasions, he was able to show it last year, especially in the last three races, where he performed really well.”

your valentine's date is here 💙 the AT03 in all its beauty 😍 pic.twitter.com/5mEcPuSNI9

Gasly, who has now received a trophy on each step of the podium thanks to his P3 in Baku last season, was consistently one of the standout drivers of the year finishing ninth in the championship and helping the team to sixth. The Frenchman is hoping to continue that form and believes that there will be many surprises in store over the 2022 season.

“I think we will have to tackle [the new season] with an open mind, being ready for any eventuality,“ Gasly said. “It will be a big challenge for the teams to work out how to build the best car possible to comply with the new regulations. I hope that it works really well for us. I’m sure this season will be full of surprises.

“I will be trying to build on the run I had of very good results and to continue to be on top of my game with the car I have. I really hope that this is a year when I can fight at the very front, to finish regularly in the top five and even higher if the car is good enough for that.

“Last year we came very close to fifth place in the Constructors’ and it would be super to achieve that this year. It’s too early to say if that will be possible but I will always give it my best shot and get the most out of our car.”

Tsunoda meanwhile had what Tost described as “the typical year for a rookie driver…where downs and mistakes are unavoidable” but the young Japanese driver did seem to get everything into place at the end of the season and finished with a high in Abu Dhabi.

“I ended last year well,” Tsunoda said. “With a fourth place in Abu Dhabi, so I want to carry that momentum into this new season. I feel more pressure to perform now than I did last year, but it’s a good pressure, which is motivation for me when I’m training.

“I want to improve my pace and the consistency in the way I drive. I know what I have to do to achieve that. If I can work the way I did at the last three or four races of last year, that will be a good way to start. It won’t be easy, but I am confident that I can achieve that.”

The Japanese driver is hoping that his Formula 2 experience with the 18 inch tyres will give him one less thing to have to get to grips with this season.

“I’ve experienced this feeling before, because when I raced in Formula 2, we made the same switch to 18 inches and I felt the same difference there. It felt like a similar step, so I think I can use the experience I had in F2. But it’s not just the tyres that change this year, the new car means there are lots of changes for 2022 to learn about and adapt to.”

“The wheels themselves have increased in size from 13 inches in diameter to 18,” said AlphaTauri’s Head of Sporting Direction, Marco Perrone. “And the area around the wheels, with the covers, has also changed, and this has involved looking at the best way to deal with a new scenario.

“For example, the wheels are heavier, the fronts being about two kilos heavier than before and the rears are up by four. So, we have looked at how best to deal with this and we have made adjustments to our pit stop crew accordingly. It’s a challenge but all the guys are very motivated. They are working very hard in the gym with a special programme specifically set up to deal with pit stops.”