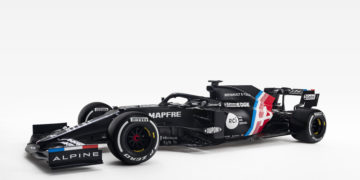 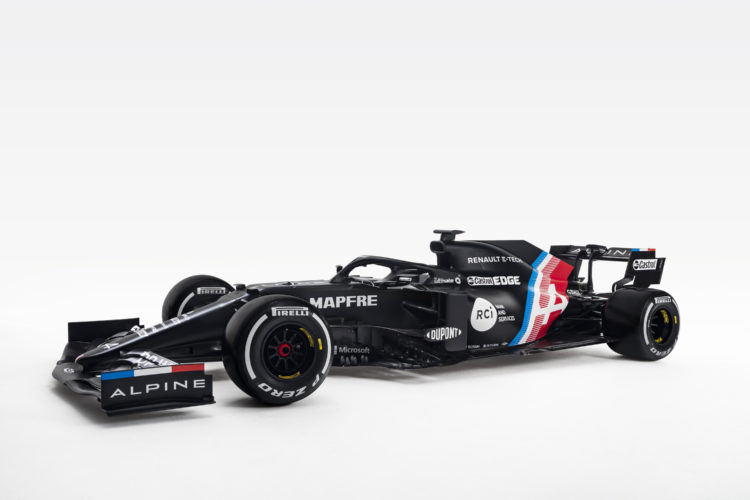 Alpine have released initial renders of their new look Formula 1 car, sporting a black livery with company colours on the engine cover.

As part of Renault’s Alpine rebrand, they have released some initial images of their new look.

As expected, the renders show a primarily black livery with the Alpine company colours adorning the engine cover.

Newly appointed Alpine CEO Laurent Rossi also revealed the car in a studio setting, saying that the 2021 car will be called the A521.

It’s highly likely the car that starts the Formula 1 season will look quite different, however. Kimoa are mooted to become a primary sponsor, thanks to the arrival of Fernando Alonso for 2021, meaning more incorporation of their colourful branding. The final look livery will be revealed in February.

Speaking at the Renaulution event in Paris, Renault CEO Luca de Meo outlined the company’s plans for Alpine. The company will be the ‘Avant-garde’ branch of the Renault umbrella, with Alpine positioned at the upper end to cater for cutting edge technology and sport.

“Giving a powerful and specific identity to Formula 1, but also to the entire Alpine motorsport programme, is an evidence and an opportunity.” said Alpine’s Design Director Antony Villain. “With motorsport at the heart of our process, the graphic identity is key.”

“The livery presented today is the first evocation of the Alpine F1 team’s new identity. Some of the structural graphic elements will remain on the racing livery while others will change. The ‘oversized’ emblem in a tricolour graphics system is the first clear-cut symbol of the brand’s identity in motorsport. The blue, white and red refer to the colours of the French and British flags, which is very important to us. Numerous variations on all the motorsport assets are still to come.”