Analysis: Where has Ferrari’s speed gone?

Analysis: Where has Ferrari’s speed gone?

Austrian Grand Prix – Ferrari’s shocking lack of pace in qualifying came as a surprise to many on Saturday, but not when you look at the figures…

The big shock after qualifying at the Red Bull Ring on Saturday was the surprising lack of pace from Ferrari. While they’ve been downplaying their competitiveness ever since pre-season testing, there was a sense that there was a bit of sandbagging going on and, once things got serious in qualifying, things wouldn’t be so bad.

Practice didn’t indicate a whole lot as, up until last year, Ferrari would stay pretty quiet through Friday and Saturday morning before turning things up during qualifying. However, on this occasion, they weren’t kidding. Sebastian Vettel failed to get through into Q3 while Charles Leclerc barely scraped in before ending up a pretty discouraged P7 at the end of the qualifying hour.

Ferrari’s team boss Mattia Binotto is pointing the finger squarely at the aerodynamics being lacking, and that the team will have an entirely new aerodynamic package ready to go for the Hungarian Grand Prix. But, without the car being an absolutely calamitous design, it appears engine power is a far more likely culprit for Ferrari’s sudden drop in pace.

Their straightline speed was by far and away the best last year, allowing Charles Leclerc to take wins at Spa-Francorchamps and Monza – two of Formula 1’s quickest circuits. But even a cursory look at the figures in Austria gives away that something has fundamentally changed since last year – the Red Bull Ring also being a power-hungry venue.

Car’s speeds are also measured at the finish line, which is handy at the Red Bull Ring, as it indicates how quickly the car has accelerated back up to speed coming out of the last corner. Last year, Ferrari led the way with 297.1 km/h as they accelerated out of Turn 12 – this year it’s only 287.7. That’s almost 10km/h slower, meaning the car itself either is running the aerodynamics of a concrete block, or the engine itself is producing less power and torque.

This drop in pace also applies to the two Ferrari customer teams, meaning the aerodynamic argument carries less weight. Alfa Romeo did a 1:04.1 with Kimi Raikkonen last year, this year both Alfas could only manage 1:05.1 and out in Q1. Their best time was a full second a lap slower. Haas did a 1:04.0 with Kevin Magnussen last season, and 1:05.1 this year – 1.1 seconds a lap slower.

In terms of top speeds, there’s small differences for others. Max Verstappen’s speeds through the speed trap and the finish line are 2 km/h down on last year, but his laptimes are virtually identical to last year. Lewis Hamilton is up, marginally by 2-3 km/h, in terms of speeds, and his laptimes have improved by 2 or 3 tenths. Lando Norris’ McLaren is virtually identical in terms of speeds, and up in terms of laptime. So there’s consistency for the Mercedes, Honda and Renault power units, with any changes from last year explainable through aerodynamic changes.

The three teams running Ferrari power have basically all lost a second a lap average since last season, and the chances of all three of the teams designing a car that’s aerodynamically worse than last year’s is pretty slim. 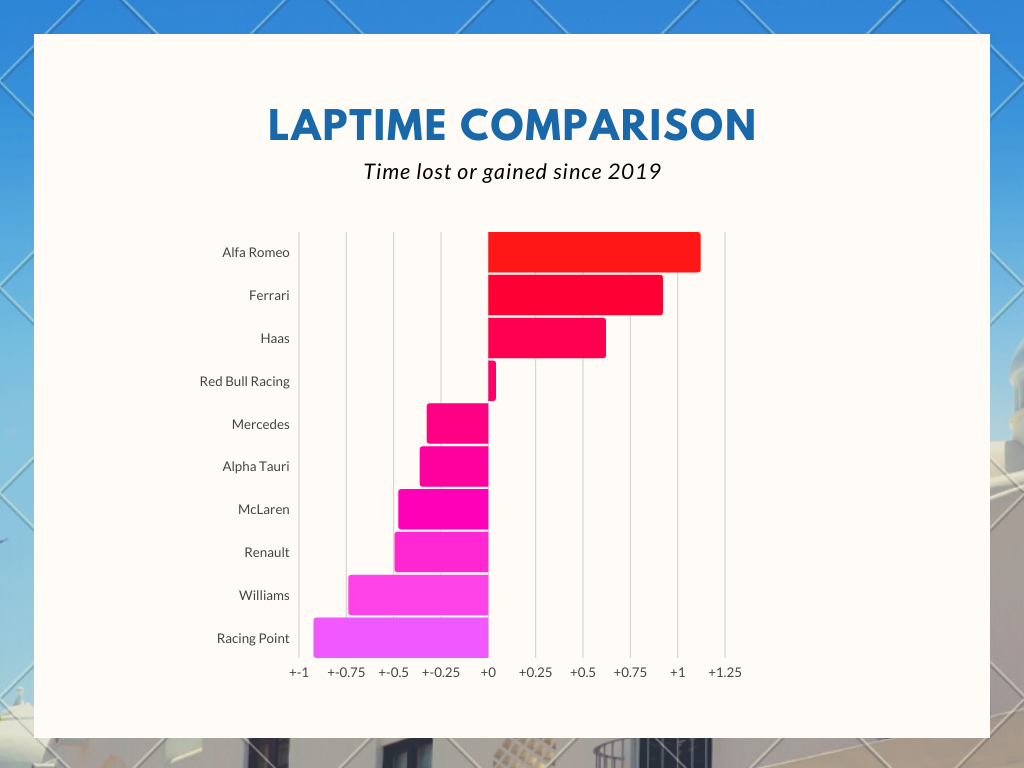 There is a theory that for at least last season, Ferrari found a way to tinker with their fuel flow to go beyond the 100kg/h limit. This is unproven, with the FIA sensors last year reading correctly as the reported trick Ferrari found was done after the sensor reading. As a result, all the data would have read correctly. Having analysed the engines over the winter break, the FIA said that there’s enough found to cast doubt on the claims of Ferrari’s legality: ‘The FIA was not fully satisfied but decided that further action would not necessarily result in a conclusive case due to the complexity of the matter and the material impossibility to provide the unequivocal evidence of a breach.’

In its most basic terms, the FIA are saying that they know Ferrari were up to something but lack the technical know-how to actually prove they did it during a Grand Prix weekend. With Technical Directives handed down left, right, and centre at the end of 2019, and the introduction of another fuel sensor for 2020, the trick Ferrari were allegedly pulling is no longer possible without detection.