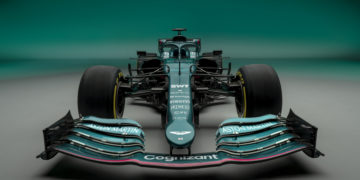 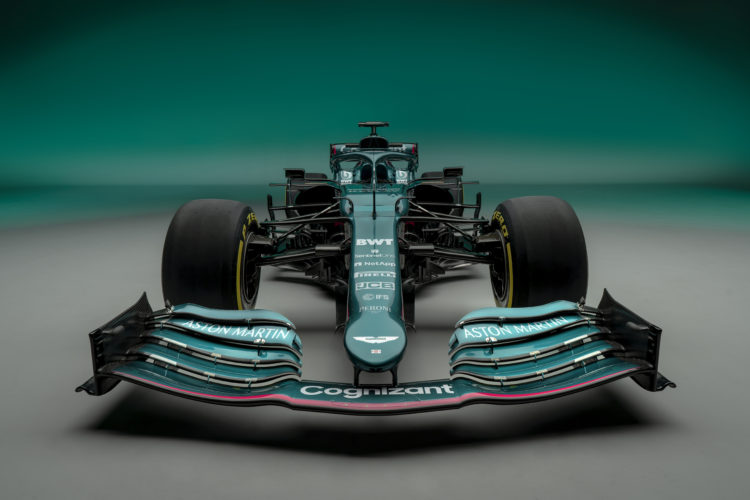 The first Aston Martin F1 car in 60 years has been revealed, as the former Racing Point team complete their rebrand for 2021.

Aston Martin have revealed their new car, the AMR21, in an online launch that signified the conclusion of the rebrand of the former Racing Point team.

The AMR21 is an evolution of last year’s Racing Point RP20, with the car revealed by drivers Lance Stroll and Sebastian Vettel at a launch event from Aston’s headquarters in Gaydon in the UK.

The AMR21 is the first Aston Martin F1 car since the DBR5 driven by Roy Salvadori and Maurice Trintignant at the 1960 British Grand Prix.

The new car is presented in British Racing Green, with subtle hints of pink to reflect the signing of BWT for 2021. Also presented are new title sponsors Cognizant, as well as Peroni Libera 0.0%, Crypto.com, SentinelOne, EPOS, NetApp, Girard-Perregaux and Replay.

“I have dreamed about this day for a very long time.” said Aston Martin boss Lawrence Stroll, who bought into the Aston company during 2020 alongside his Racing Point shareholding. “I have always been a car guy, since I was a child. I have always loved racing, too. My first dream was to own a Formula One team. My second dream was to acquire a significant shareholding in Aston Martin Lagonda. Today is about the merging of those two dreams. So, as I say, today is all about dreams, and it shows that dreams really can come true, in the shape of our new AMR21.”

“Aston Martin returning to Formula One after an absence of 61 years will have a powerful effect on the sport, the media and the fans, commanding global attention.”

“This is just the beginning. The team is pushing forward, and our ambitions are limitless. We now have the pieces in place, the people and the partners, to make real progress.

“The launch of the new AMR21 is also the celebration of a new beginning for Aston Martin. Today’s transformational event has given us the opportunity to communicate the evolution of the iconic Aston Martin Wings logo for only the 12th time in the company’s 108-year history. The Aston Martin Cognizant Formula One™ car is our group’s highest expression of performance, innovation, engineering quality, attention to detail, and teamwork. For that reason it is natural that our new logo should make its debut on our new Formula One car.

“As for the year ahead, the core nucleus of what we need to succeed is already present and correct. I have great confidence in Otmar [Szafnauer], Andrew [Green] and all who work for them. I firmly believe we have the perfect blend of experience and youth in Sebastian [Vettel] and Lance [Stroll]. An ethos of fierce ambition and unshakeable dedication is shared by every single team member. It is exhilarating to see – and to feel.”