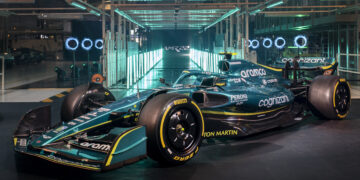 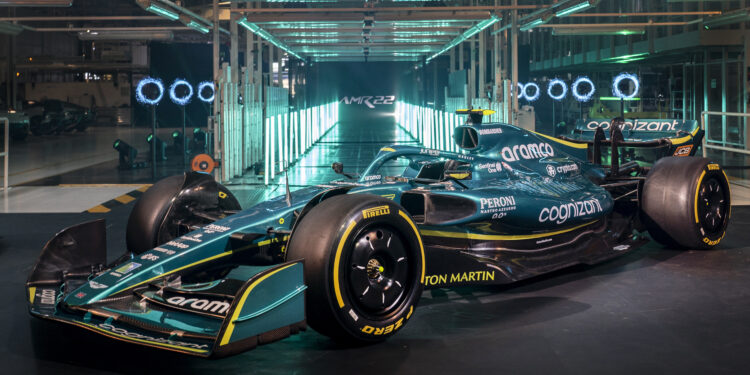 The Aston Martin Aramco Cognizant F1 Team pulled the covers off their AMR22 in a launch event at the Aston Martin production factory in Gaydon today.

While being the third team to have a 2022 car launch, after Haas and Red Bull, Aston Martin were however the first to debut their actual car as opposed to digital renders or a show car. The team will head into the new season with an unchanged line-up of Sebastian Vettel and Lance Stroll, both of whom are eager to get behind the wheel of their new car.

“It’s always a very exciting time of the year when you see the car for the first time,” Stroll said. “And especially this year, with these new regulations, the cars look so different. It’s a very exciting time for F1, I think it’s an opportunity for all the teams with these new regulations. For us we have to remember it’s about a long term vision, it’s about the future.

“I think at this stage it’s also important to get out there and understand this car, learn about it. It’s going to be so different to what we’ve been used to in the last few years that there’ll be a lot of learning but it’s very exciting, that’s for sure.”

Vettel, who took Aston Martin’s only podium of the year with a P2 in Azerbaijan, was also feeling the excitement and hopes the new rules will bring the field closer together giving them more opportunities for podiums.

“It’s very exciting to see the car built for the first time,” said Vettel. “It’s exciting but now you think “well, it’s ready so let’s get into it”. It’s more exciting to drive since this year there’s so many novelties and so many things we are keen to find out and look forward to.

“I think it’s been an incredible project, a lot of work went in and to see it from scratch, coming together, and now being built right in front of you, I can’t wait to step inside and see how it feels.

“Since there’s so many novelties this year,” the four-time world champion continued. “It’s very difficult to know what to expect. To point out where we will be is impossible at this stage, but surely we’re on the climb so we want to be better than last year.

“Last year we had our difficulties and I think for many reasons we should be better off this year, at the same time there are so many new things – new tyres, completely new cars, lots of new challenges. I hope the field will be closer together and that will give us more chance to race and race more in the front than we did last year.”

For the car itself, Aston Martin’s Chief Technical Officer, Andrew Green, described it as if “the whole rule book was effectively ripped up and started again” and that as there was no previous real-world data for the team to work with, that virtual development played an immensely important role.

“A massive challenge,” Green described it as. “Massive change of regulations to roll back to a ground-effect car so that meant that our winter has been probably the most challenging that we’ve ever had. New regulations, new challenges, but new opportunities.

“We’ve got a lot of learning to do with these tyres, they’ve never been run with ground-effect aerodynamics before so there’s a lot of data to gather. I’m really hoping they will allow the drivers to push harder and we’ll get better racing, which is what we all want.”

Green doesn’t believe that the AMR22 will remain as it was unveiled for long as there’s so much to learn about how the cars work that the development rate will be high.

“I think what we’re seeing here is the first iteration of the AMR22,” Green continued. “We’re on a steep learning curve, everyone’s going to be on a steep learning curve, no one’s got all the answers yet but I think we’re going to see this car develop highly over the coming season and that will forge the way for ‘23 as well. It’s an exciting time to be in Formula 1, it’s also quite nerve-racking.”

Tom McCullough, the team’s Performance Director, agreed that there is lots of development work to expect throughout the season and that while having to work to the new regulations is scary, the engineering team have been relishing the challenge.

“From an engineering point of view there’s nothing more exciting than a huge regulation change,” McCullough admitted. “It’s quite scary at times too but we’ve been having to go back to the drawing board with a clean sheet of paper in so many areas.

“It’s been fantastic fun working with the great team of people we have back at Silverstone evolving to what you see now and that’s only going to develop quickly during the season. This launch car will change quickly but it’s great to be stood here in front of it now.”