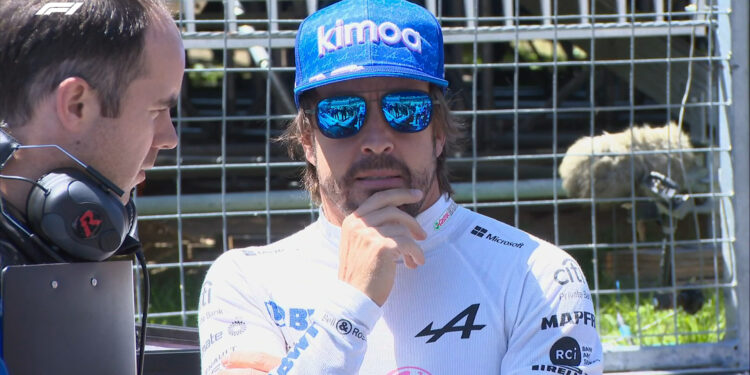 After showing strong pace in the dry on Friday, Alonso’s Alpine came alive with the wet conditions on Saturday to see him seal his first front row start since 2012. Before the Grand Prix the Spaniard was hoping to be able to fight polesitter Max Verstappen at the start but the Red Bull driver had the better getaway so instead Alonso had to defend his P2 from those behind.

From there, bad timing of the Virtual Safety Cars and engine issues, which Team Principal Otmar Szafnauer said was suspected to be as a result of an air leak, prevented the two-time champion from making the most of his weekend and at the end Alonso just took the chequered flag in P7 0.302 seconds ahead of Bottas’ Alfa Romeo.

Even then that was only possible as Alonso’s teammate, Esteban Ocon who was in P6, had dropped back closer to the Spaniard in order to create a DRS train so the cars behind wouldn’t have as much of an advantage.

“We were unlucky once more with the VSC,” Alonso said. “I was just on the start finish line when it came and I was just entering the pits when it ended so we decided to stay out, so I was a little bit unlucky there. But the biggest problem was the engine, we had an engine problem in Lap 20 or something like that.

“I was losing, like, one second a lap with the energy deployment, so from that moment we forgot about the podium, or retiring the car, we were just staying on the DRS train with the cars in front just to defend. But it was very difficult to stay with Esteban or Charles [Leclerc] because on the straights we were losing one second.”

That wasn’t the end of his day however, as post-race the stewards investigated Alonso’s defensive manoeuvres on the penultimate lap of the race as he weaved on the straight to hold off Bottas.

Unfortunately for Alonso, after hearing from the drivers, reviewing the footage and telemetry, the stewards concluded that the Alpine racer did indeed make more than one change of direction and he was handed a penalty point and a five second time penalty, which dropped him back behind both the Alfa Romeos.

The decision read: “Between turns 10 and 12, on the penultimate lap of the race, car 14 made repeated changes of direction to defend against car 77 who had to lift at one point and briefly lost momentum.

“Whilst noting the driver’s point that at no stage was any point of car 77 alongside car 14, the Stewards consider this to be a clear breach of the above regulation. The Stewards therefore impose a 5 seconds time penalty in line with that imposed for a similar incident in Australia 2022.”

Alonso summed the race up as a lost opportunity: “I think this weekend we deserved better than ninth position, but it’s still good for both cars to score points in the end. We ultimately lost a big opportunity to fight for a potential podium as I felt like I had the pace to do so.”