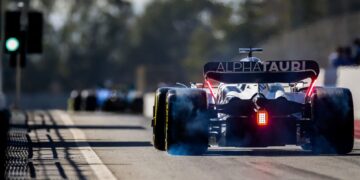 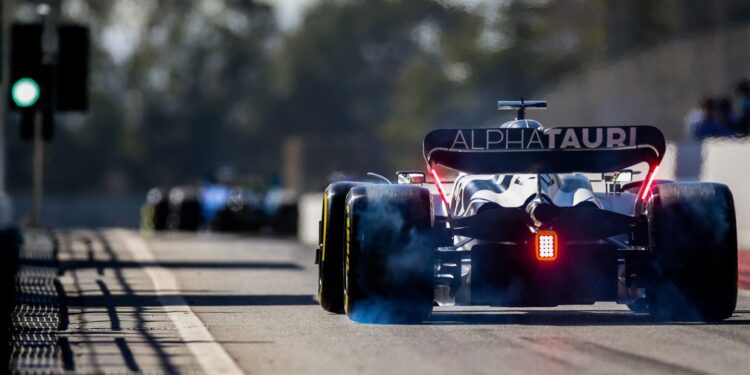 The first shakedown test of Barcelona has now concluded, with some surprises seen as teams grapple with the all new cars for F1’s new era

For 2022, F1 is grappling with the biggest technical regulation changes seen since the 1980s. This has the cars looking very different to recent seasons, and teams have been pulling late nights at Barcelona to understand and unlock every extra bit of pace they can extract from the new challengers.

The shakedown test was the first real opportunity the teams had to run their 2022 cars in anger, so the lap times will by no means offer a full picture of pecking order. Teams run individual programmes, with some focusing on long runs while others will look at low fuel pace to test the initial performance of the power units. The caveat from testing is always – never assume what you see is true performance.

What did become clear over the three day test however was that surprise frontrunners have emerged, while equally there were some surprising struggles. F1 also has gone back to the future, with an technical term and effect for teams to understand returning.

The introduction of ground effect for 2022 has a huge impact on the design and performance of the cars, but has introduced a new literal headache for the engineers and drivers.

On the first day of testing, cameras captured cars  bouncing on the pit straight under braking. This was not an isolated incident, with all teams having the same problem. The effect is called porpoising, a term F1 has not used since the last ground effect cars in the 1980s.  On it’s website, F1 explains the phenomenon:

“The cause is an aerodynamic one, where either the leading edge of the floor, or perhaps the front wing, is pushed ever closer to the ground as the downforce acting upon it increases. The closer to the ground it gets, the more powerful the ground effect is, as the air rushes ever-faster through the shrinking gap.

This increases the pressure difference between the underside and upper surfaces, so increasing the downforce yet more – until it stalls. At which point, much of the load is suddenly released, the front of the car rises up suddenly in response”

As with all new aero effects, teams will no doubt look to see if there are any further exploits to be gained from porpoising. The focus ahead of the official test in two weeks time for them however is to prevent performance loss, stress on the suspension as well as other components, including the driver.

Porpoising was an issue for all teams during the test, and time will tell if any team manages to extract performance or at least tackle the issue of excessive porpoising when at the official pre-season test in Bahrain.

Ferrari will likely leave the Barcelona test feeling quietly confident. It achieved the most laps of any team at the test, with Charles Leclerc and Carlos Sainz, clocking 439 laps. Speaking at the day two lunchtime press conference , Team Principal Mattia Binotto downplayed Ferrari’s impressive start to the year, commenting that it was too early to tell how competitive the car is:

“I think it’s very early days.  “It’s always great to have good consistency when running because it’s time to learn these new cars.

When you’re doing a lot of laps, you are certainly collecting data. So far I’m pleased by the fact that yesterday we did many laps, and this morning too, which is important. Regarding the pace, it’s very early to judge. What I can see is that we are all very close, which was one of the objectives of the new regulations.”

Binotto also reinforced Ferrari’s decision to stop development work on their 2021 challenger to focus on the new regulations, which looks to have paid off:

“Overall, as Ferrari it was important for us to put focus and priority on 2022. We always said it was an opportunity. Now we are on track, we are trying to learn the car.

“How we benefit from that, I think only the next months – not the next days – will tell us. To see the full potential of the cars will take at least four to five races as there is still so much to learn, to adapt, to address”.

When reacting to the interest in the team’s strong test performance, Binotto said they were the “outsiders” for 2022: “Let’s wait and see. Honestly, we’re not the strongest team. We are still the outsider and not the favourites.”

Regardless of reports, Ferrari know they have caught a few teams by surprise particularly the champions Red Bull and Mercedes. While Mercedes put in the fastest time on the final day, the momentum is very much with Ferrari as F1 moves to Bahrain.

McLaren topped the times on day one in both sessions as well as the morning of day two. Clocking up 365 laps at the test, only Ferrari finished ahead of them.   Like the Ferrari, the McLaren has shown solid reliability as well as pace. While the paddock believes it is not quite on the pace of Ferrari, it was one of the star performers of testing, with George Russell commenting to F1’s official site  that “some teams are looking very fast, a red team and an orange team in particular”.

Lando Norris was very happy with the performance of the car. In the team’s post test statement “It’s been a good week and start to the year. Many things have gone well”. This was echoed by Daniel Ricciardo who said  “Overall, a pretty flawless three days for the team, a really awesome start to the season”.

Team Principal Andreas Seidl acknowledged the team had achieved it’s objectives: “It’s been a productive first three days for us in Barcelona, and we leave Spain with plenty of data to analyse before we head to Bahrain for the official pre-season test and Grand Prix.

The hard work from the entire team has been crucial in enabling us to achieve our objectives”.

Seidl did not comment on the McLaren’s place in the order: “Despite the significant regulation change, the competition is looking very tight between the teams. There doesn’t appear to be any clear leader or backmarker at this stage, even though there are a wide range of philosophies and solutions up and down the grid.

We look forward to heading to Bahrain, where we will further gather data to help us develop the car before kicking off the 2022 season in just under a month’s time.”

The grid will be looking at McLaren’s performance at the Bahrain test to see if the lap times confirm the team will take its next jump back to the front of the grid. The team will leave Barcelona feeling very confident of the season ahead, knowing their car is both fast and reliable.

Alfa Romeo were beset by reliability problems throughout the test, with new driver line up Valtteri Bottas and Zhou Guanyu only managing 154 laps across the three days with the new C42 car, with question marks over their pace.

“It was a positive day, with quite a bit of running and some good indications until nearly the end of the session. I was able to run with the C3 compound, but unfortunately a spin and a small hydraulic leak meant I couldn’t try the C4 tyres.
It’s only testing and we can’t really compare what we are doing against the other teams, but the feeling is that we are going in the right direction. The most important thing is to work together as a team to make sure we take a step forward ahead of testing in Bahrain.”
Zhou Guanyu was also similarly upbeat for the media, highlighting “good progress” was made across the test, despite his own reliability problems:
“The team has made good progress with the C42, even though I wasn’t able to get all the running I would have liked.  A few technical issues stopped us in the afternoon, but the data we collected during the morning session will allow us to keep working and developing the car.
Our focus switches to making the most of the time between now and the Bahrain test, and maximising our mileage when we get there. I am confident we can make up the time we lost and be fully ready for the season ahead,” said Zhou.
The team never finished higher than tenth across the test, and will return to Switzerland with a lot of work to do to salvage their winter programme. The team could start the season on the back foot if they have a repeat of the shakedown test when they arrive in Bahrain.

Haas’s decision to abandon 2021 and focus on their 2022 challenger has yet to bare fruit, finishing the test with the lowest overall lap count, at 159.

Like Alfa Romeo, they also suffered from reliability problems across the test,  hampering their performance and test programme. While the team completed 109 laps on day two, they managed just nine laps on the final day due an engine issue.

“The first day was a little bit clumsy, I would say, but we learned enough that on the second day we were well prepared. The second day was actually pretty good, we learned a lot, if you think we had three days of testing but really we only managed one. I think we made good progress.

Now we have to get prepared for Bahrain. We have information – we know what to do and we will get it done. Hopefully in Bahrain we don’t have any gremlins” Steiner concluded.

In addition to the teething issues, Haas needs to confirm the over the future of Russian driver Nikita Mazepin following the announced sanctions against Russian athletes. Steiner told The Race when asked about Mazepin’s status:

“Yeah, it needs to be resolved. Not everything depends on us here. There are governments involved, and I have no power over them. And I think we need to see also the situation, how it develops in Ukraine.”

The final test for the teams

The real competitive order will start to emerge on the final day in Bahrain, when traditionally the teams do their low fuel runs after feeling confident enough to turn up their engines for maximum performance.

The reliability issues seen by all teams but particularly Alfa Romeo and Haas will be the final test for the 2022 challengers ahead of what promises to be an exciting and unpredictable season.  Porpoising will be a buzz word for the year, with all teams looking for an easier ride in more ways than one.

The final pre-season test is scheduled to take place in Bahrain on March 10th to 12th, ahead of the season opener on March 20th, also in Bahrain.