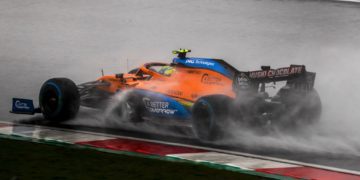 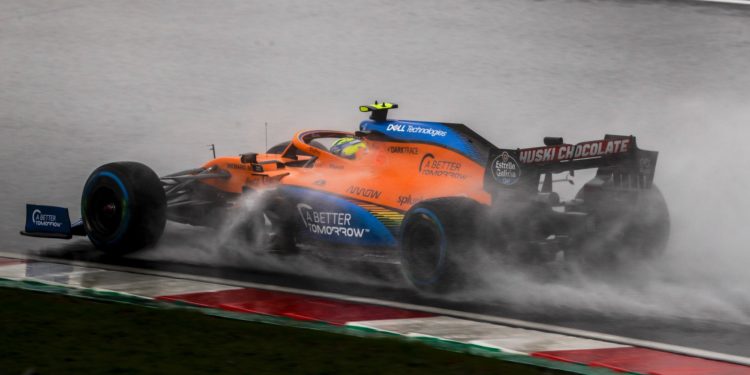 Turkish Grand Prix – Lando Norris and Carlos Sainz were both given grid drops for incidents during this afternoon’s qualifying session.

When it rains, it pours is a good summary for not only Formula 1 today but also the McLaren team. Not only did the British team have to suffer the disappointment of missing out on Q3 for the first time this season, but both their drivers were handed grid penalties in the hours following qualifying.

Norris and Sainz had initially finished in P11 and P13 respectively but that will now be P15 and P16. Sainz’ three place penalty and a point on his license was handed out after it was ruled that he had impeded Sergio Perez during Q2. While the stewards acknowledged that the conditions were difficult, Sainz, who was on an outlap, had been informed about the Racing Point by his team but still impeded the Mexican for a few corners.

“Very disappointed with today,” Sainz said after qualifying but before the penalty was announced. “We expected a tough quali because we’ve struggled to warm up the tyres all weekend. However, I think we compromised the session with the Intermediate at the start of Q2 which obviously didn’t work as expected, and by the time we were managing to get the Wets to warm up properly, the session was over and I could only do two timed laps before the chequered flag.

“It wasn’t enough. For the race the conditions look to be drier again, so we’ll do our best to recover from today.”

Norris meanwhile will not be overly impressed with the belated birthday present from the stewards, the Brit turned 21 on Friday and was handed a five place grid drop along with three penalty points for a double yellow flag infringement.

The decision states that: “Car 4 approached turn 8 which was under double waved yellow flags for Car 6 (Nicolas Latifi). Telemetry shows that Car 4 slowed in the sector and resumed speed after the incident. Car 4 then asked his team if he should abort the lap, but was told to stay out because of the rapidly changing track conditions.

“Car 4 completed the lap, which turned out to be his fastest lap of Q1. While the stewards acknowledge that Car 4 was not attempting to set a quick lap time, due to the changing track conditions he nevertheless did so and thereby breached the referenced regulations.”

Speaking before the results of his investigation were known, Norris said that they would have to fight through the pack in the race after struggling through the whole of qualifying.

“A difficult quali,” said Norris. “I don’t think we managed to extract enough out of the car to do better today, we just struggled throughout. Maybe we didn’t choose the right tyres for the start of Q2, so we were a couple of laps behind the others.

“At that point I don’t think we managed to get the Wet tyres in the right window to improve enough and make it to Q3. We’ll have to try to fight our way forward tomorrow and take any opportunities that come our way.”

McLaren were a bit too optimistic at the start of Q2 and tried to make the intermediate tyres work before having to swap back to the full wets. Team Principal, Andreas Seidl, acknowledged that that was the wrong choice but the team will learn from today and fight for points during the race.

“It’s been a very tough Saturday for the team,” commented Seidl. “Having neither car in Q3 was definitely not what we had in mind coming to the circuit this morning. Track conditions were difficult during the qualifying session, requiring rapid decision-making. With hindsight, deciding against the full Wet tyre at the start of Q2 potentially cost us the chance to progress as we couldn’t put the Intermediate tyres in the right window.

“Points are distributed tomorrow and not today. It’s important for the team to reset, apply what we’ve learnt in different conditions so far this weekend and get ourselves into the fight for points tomorrow.”