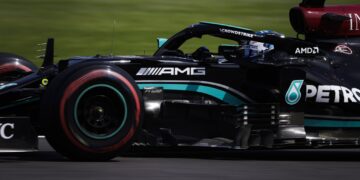 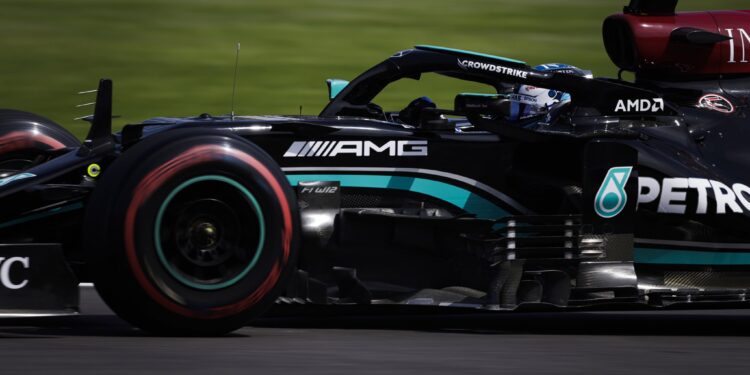 Mexican Grand Prix – Valtteri Bottas has claimed pole position as Mercedes locked out the front row of the grid for the Mexican GP.

The Red Bulls had looked quick all Saturday, but it was Mercedes who set the pace as both Max Verstappen and Sergio Perez were unable to improve their times.

Lewis Hamilton finished in second place with Verstappen in third and home hero Perez in fourth.

The track had cleaned up nicely since early on Friday when the surface was covered with a thin layer of dust. However, the red flags were brought out for Aston Martin’s Lance Stroll who lost the rear on the final corner and collided heavily with the barriers.

Both front and rear ends of the Canadian’s cars were ruined and the team will have their work cut out for them to get the car ready for race day. Stroll was ok as he left the car, but was taken to the medical centre for mandatory checks.

After a lengthy delay, the session was resumed with just under 11 minutes left as the track was cleared and the barriers were deemed safe.

Ferrari’s Carlos Sainz had trouble briefly when he complained of no power down the pit straight. The Spaniard managed to get going again to prevent any further stoppages.

At the first runs, it was Red Bull who took the lead with a stunning lap from Verstappen. His 1:16.788 was nearly seven tenths faster than his teammate Perez in second place. Bottas was the next Mercedes car in third place, with McLaren’s Lando Norris in fourth place. Championship contender Lewis Hamilton could only manage fifth.

Bottas managed to get another run in and set a better lap to go into second place, just under two tenths off Verstappen. Hamilton also improved but was still 0.4s adrift. Perez moved up into fourth but was 0.6s shy of his teammate.

Perez improved again moving up to third with a time that was just short of Bottas in second.

However, in the dying embers of Q1, Ferrari’s Charles Leclerc set a 1:16.748 putting him into first place, but Bottas managed to just get ahead by 0.021s.

Alpine’s Fernando Alonso, Williams driver Nicholas Latifi, the Haas drivers of Mick Schumacher and Nikita Mazepin, and Stroll were the drivers knocked out in Q1.

When the drivers left the pits for Q2, the mediums seemed to be the starting tyre of choice as every driver except AlphaTauri’s Yuki Tsunoda and Alpine’s Esteban Ocon started their runs on the yellow marked compound.

Verstappen set the early pace with a 1:16.483, narrowly faster than Hamilton behind who was just 0.016s slower. Bottas set the third fastest time with Perez down in fifth, behind Leclerc.

Tsunoda moved up into third place with a time just two tenths slower than Verstappen on his soft tyres.

In the drivers’ second runs, Hamilton managed to pip Verstappen by just 0.009s to jump up into first place.

However and faster laps were ruined by yellow flags for Antonio Giovinazzi who spun his Alfa Romeo in the final sector.

The the final qualifying showdown for pole, the drivers jostled for position in order to maximise the benefit of any slipstream.

In the first runs, the pendulum swung towards Mercedes as Bottas set a 1:15.875, a tenth and a half faster than teammate Hamilton. Verstappen could only manage third, some 0.3s slower than the benchmark. Home hero Perez was in fourth place, half a second behind.

In the second runs, Bottas maintained his advantage and none of the top four improved their times. Perez even ran off the circuit as he tried to improve his time.

RIcciardo finished in seventh place, just ahead of Leclerc in eighth. Tsunoda ended the session in ninth, with Norris rounding out the top ten.