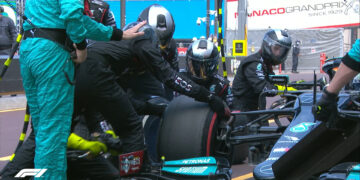 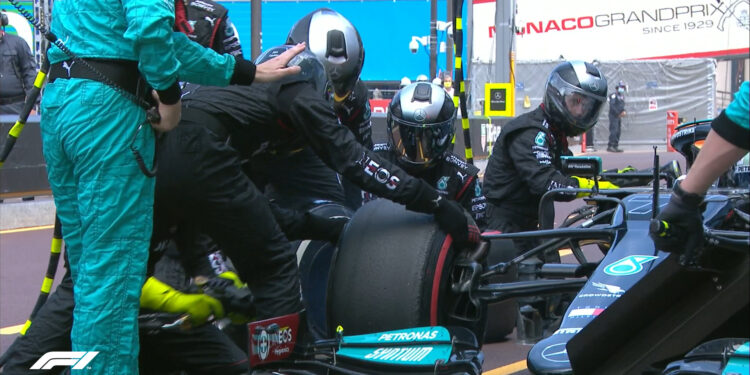 Monaco Grand Prix – Valtteri Bottas had been running second before his first pit stop turned disastrous and became his last action of the race.

With Charles Leclerc failing to start the race, the Finn had been promoted from third to second before the lights even went out but wasn’t able to make the move on Max Verstappen to take the lead at the start.

“The start was good,” said Bottas. “Max defended and I had to lift. The pace was good but I think the Red Bull tyres, they lasted a bit better today, the soft tyres, so he pulled a gap towards the end of the stint.

“My front left tyre was graining, I’m sure with the hard it would’ve been okay but it would’ve been tricky to challenge for the win. Of course we would have tried but at least we could’ve come away from today with a good podium.”

On lap 29, Bottas was the first of the frontrunners to head for the pits but unlike the smooth stop Mercedes had performed for his teammate just a few minutes earlier, there was nothing the pit crew could do for the #77 car as the front right refused to move, no matter what they tried.

The team later revealed that “the wheel nut machined onto the axle”, but as the seconds initially passed, Bottas said he was calculating his position losses before the problem was deemed terminal.

You have to feel for Valtteri 😖#MonacoGP 🇲🇨 #F1 pic.twitter.com/VaHomPT2pr

“I was counting,” Bottas continued. “Okay, now we’ve maybe lost the place to Sainz, then probably to Norris, then it was just getting so long that I couldn’t believe it. I think I’ve never had an issue that my race ends in a pitstop so it’s really strange to be feeling.

“I couldn’t believe what happened and still feels strange that the others are racing there and I’m here but it happened and it was a big mistake by us as a team that we need to learn from.”

The Finn stressed that the team would be investigating to find the exact cause and if it turned out to be human error, there would be no blame, just support and learning from the circumstances.

“Whether it’s a human or technical issue it doesn’t matter, we need to find the solution. If it’s a human error we need to support the guy who did it but we need to learn from this, that’s the main thing in my mind and at the same time, super disappointed.”