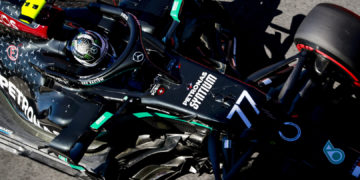 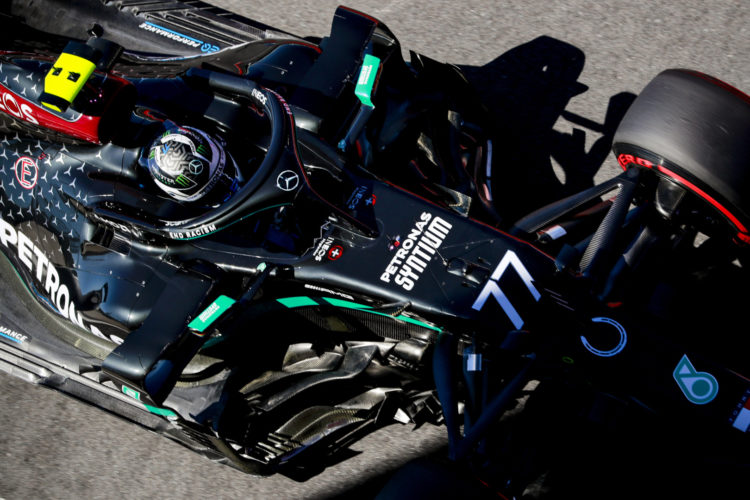 70th Anniversary Grand Prix – Mercedes’ Valtteri Bottas says he feels his team were ‘sleeping’ on strategy, after being beaten by Max Verstappen.

Having started from pole position, Valtteri Bottas wound up coming home in P3 at the end of Sunday’s Grand Prix at Silverstone. The Finn held the lead off the line and withstood some first lap pressure from Lewis Hamilton to lead the Merc pair.

However, after only a handful of laps, the Mercs started to struggle with blistering on their Medium tyres and were harassed by Max Verstappen approaching the pit stops.

Bottas pitted on Lap 13 to swap to the Hard tyre, while Hamilton was brought in a lap later for the same. Verstappen inherited the lead and began pulling away even more as both Mercedes drivers almost immediately began struggling with their fresh Hard tyres.

“The tyre just overheats. It’s basically boiling.” explained Bottas. “You get holes in the tyres and then you just lose grip. Once you start to have those blisters in that particular tyre you just lose cornering grip and you go slower and slower.”

Verstappen pitted from the lead on Lap 26 and came out behind Bottas after a slow stop, but passed the Mercedes driver effortlessly through Luffield.

Bottas explained that he had wanted to go faster during that stint, but the team had told him to concentrate on preserving his tyres: “I was asking if I could go faster, because I was managing the tyres around that time. But then I just got a message that the priority is to keep the tyres in good condition, and then obviously he came out from the pits pretty much side-by-side and got me into Turn Six-Seven. So then I knew, OK, could be tricky, but I was hopeful there would be opportunities. But then the middle stint was quite short.”

Bottas was brought in on Lap 32, having done 19 laps on the Hard compound. He pitted on the same lap that Max pitted to get rid of his Mediums: “We boxed and I could see Max stopping at the same time, so then, I knew yeah, it’s going to be tricky.”

After seeing Bottas’ tyres, Mercedes were happy to leave Hamilton out on track on his Hard tyres, with Lewis going a further ten laps for his second stint. With the tyres hanging on to the extent that they considered a one-stop strategy, Hamilton’s much fresher tyres in the final stint allowed him to catch and pass Bottas for P2.

The Finn wasn’t happy about how this had come about, saying he’d been pushing flat out to create opportunities in the final stint but that the 19 laps were simply too much: “I was maybe catching slightly on Max but then the tyres gave up completely. So yeah, for me, definitely I should have gone long in the second stint. The last stint was way to long and that’s when I lost the position to Lewis.”

“It’s very frustrating, starting from pole and finishing third is not ideal. I think as a team we were sleeping at some point, when Max managed to get ahead of us, and my strategy was far, far from ideal, so lots to learn from today I think.”

Bottas pointed out that both he and Lewis had suffered bad blistering on their tyres, while Red Bull didn’t seem to have the same problems: “There’s obviously something that we need to improve compared to Red Bull. I saw Max’s tyres at the end of the race and they looked perfect and mine and Lewis’ were pretty badly blistered, so there’s a difference there that, at least, I don’t know yet what it is.”

Team boss Toto Wolff says a quick reaction to their problems is needed, as the Spanish Grand Prix this weekend is likely to be similarly hot: “For us, it’s been a difficult day in the office. We knew that in certain conditions we weren’t as competitive as we would like to be and that caught us out today. It’s a combination of hotter conditions, a high-downforce car, softer compounds and higher tyre pressures that meant that we didn’t have the fastest car today and we were blistering our tyres far more than the others. We have a handful of days to find out what exactly caused our issues today, come up with solutions, test them on Friday in Barcelona and then hopefully have a better race on Sunday. It will be challenging, but we’ve had these days in the past and came out stronger and I am really looking forward to Barcelona.”