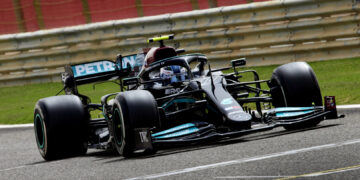 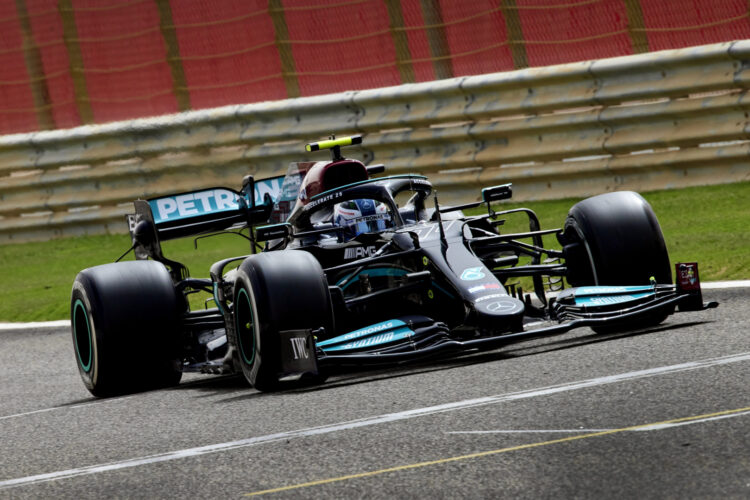 Mercedes’ Valtteri Bottas has topped the times on Day 2 of pre-season testing, finishing ahead of Alpha Tauri’s Pierre Gasly.

Mercedes have had a much stronger day of testing in Bahrain on Saturday, despite Lewis Hamilton’s morning spin and trip to the gravel.

While Valtteri Bottas remained rooted in the lower half of the field for most of the afternoon, Mercedes joined in the battle for top spot as teams started looking to the softer C4 & C5 compounds for qualifying simulations late in the day. Bottas briefly took top spot, only to be eclipsed by Pierre Gasly and Lando Norris, before popping in a 1:30.289 on the C5 compound to finish as fastest man.

Gasly had to settle for P2 on the C5 compound, as the Alpha Tauri man finished with a best time of 1:30.413, while a very late time from Aston Martin’s Lance Stroll on the same compound moved him up to finish in P3.

McLaren’s Lando Norris finished in P4 as a result of the late improvements, with his best time of 1:30.586 set on the C4 compound. Alfa Romeo’s Antonio Giovinazzi, who also briefly topped the times in the afternoon, finished with a 1:30.760 on the C5 and also scored highly on the mileage front as he completed 125 laps of the circuit. He just pipped Ferrari’s Charles Leclerc, who finished P6 with a 1:30.903 on the C5.

Williams’ Nicholas Latifi had his first go in the team’s new FW43B on Saturday, finishing in P7, while Sergio Perez finished P8 for Red Bull on his first day. The Mexican brought out the red flag midway through the afternoon session, when his engine cover flew off while going down the main straight. His best time was set on the C2 compound.

After his run was cut short on Day 1, it was a better day for AlphaTauri’s Yuki Tsunoda on Day 2 in P11, with Haas’ Mick Schumacher slotting into P12 ahead of Ferrari’s Carlos Sainz. The Spaniard was also one of the drivers to have an off moment, as he spun off during the morning session.

The order was rounded out by Haas’ Nikita Mazepin in P14, Mercedes’ Lewis Hamilton P15 and Aston Martin’s Sebastian Vettel P16. The two F1 champions saw trouble, with Hamilton spinning off and bringing out the red flags during the morning session.

As for Vettel, he was sidelined in the Aston Martin garage due to gearbox trouble, with the team needing time to replace it.