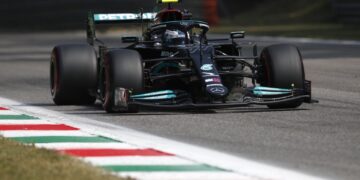 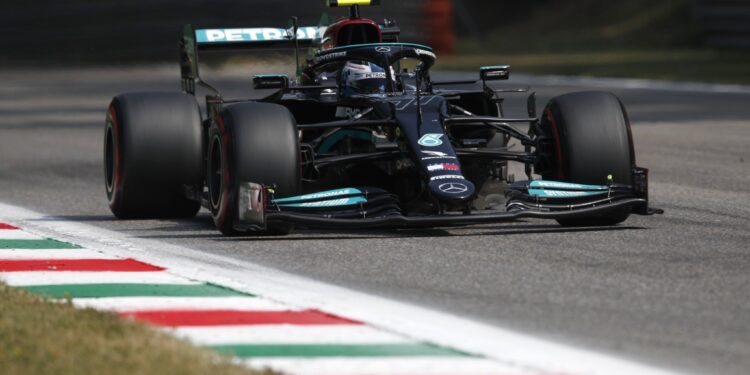 However, after two sets of power unit changes this weekend, the Finn will start at the back of the pack, which means that Red Bull’s Max Verstappen will take pole position.

Click here to view the full results from the F1 sprint

Bottas led the field away at the start and maintained his position into Turn 1 with teammate Lewis Hamilton dropping down to fifth. The Briton was passed by both McLarens and Verstappen’s Red Bull.

Red Bull’s Verstappen finished the sprint in second place, with Daniel Ricciardo crossing the line third in his McLaren.

Pierre Gasly took damage to his front wing after clipping the back of the McLaren of Ricciardo and retired from the sprint after his wing came off at Curva Grande bringing out the safety car. The AlphaTauri driver ploughed into the barriers taking him out of the running.

Further down, and compounding a bad day for AlphaTauri, Yuki Tsunoda had a coming together with the Alfa Romeo stand-in Robert Kubica. The Japanese driver needed to pit for repairs and a change to fresh soft tyres.

The safety car came back in after four laps with the leaders holding station on the restart. Sergio Perez attempted a move on Aston Martin’s Lance Stroll on Lap 9, but overtook off the circuit. The Mexican was told to yield the position and managed to complete the overtake a lap later.

McLaren’s Lando Norris finished in fourth place managing to fend off seven-time world champion Hamilton in fifth. The Ferrari duo of Charles Leclerc and Carlos Sainz finished in sixth and seventh place ahead of local hero Antonio Giovinazzi in the Alfa Romeo.

Perez was unable to progress further and finished in ninth, ahead of Stroll. Alpine’s Fernando Alonso finished in 11th place ahead of Aston Martin driver Sebastian Vettel in 12th. Esteban Ocon in the other Alpine finished in 13th.

The Williams pair of Nicholas Latifi and George Russell finished in 14th and 15h ahead of Tsunoda in the sole AlphaTauri.

Nikita Mazepin in the Haas finished ahead of Kubica with Mick Schumacher finishing at the back of the pack.