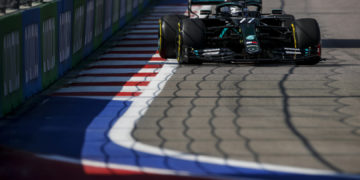 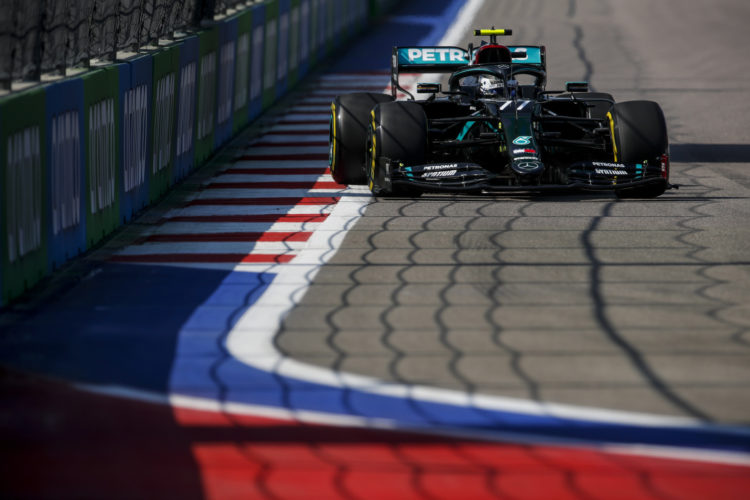 Russian Grand Prix – Valtteri Bottas and Lewis Hamilton led the way in second practice at Sochi, with the Mercedes pair a second clear of Daniel Ricciardo in P3.

Valtteri Bottas has led the way in second practice, with the Mercedes duo unchallenged at the Russian venue. Bottas logged 37 laps and a best time of 1:33.519 on the Soft compound, finishing a quarter of a second clear of teammate Lewis Hamilton.

Hamilton made an error on one of his fast laps, running deep into the escape area at Turn 13 as his left front locked up, but avoided hitting anything and was able to continue. Bottas also made a small error at the final corner early in the session but, despite the slight lack of grip, Mercedes ended up a second clear of everyone else.

Continuing with their strong pace from the morning, Renault’s Daniel Ricciardo finished up in P3 and one second behind Bottas’ time. He was able to stay just ahead of the two McLaren drivers Carlos Sainz and Lando Norris after the qualifying simulations, with Sergio Perez slotting into P6. Just 0.3 covered P3 to P6.

Max Verstappen finished in P7 for Red Bull Racing, having spun on one of his flying laps midway through the session. The Dutch driver was powering through Turn 14 when he lost the rear and spun around. He indicated some frustration after the session, with both Red Bull drivers saying the handling was a little tricky as the team don’t appear to be second-best as usual.

Charles Leclerc was P8 for Ferrari, with Esteban Ocon in P9 for Renault, and Sebastian Vettel rounding out the top ten in the second Ferrari.