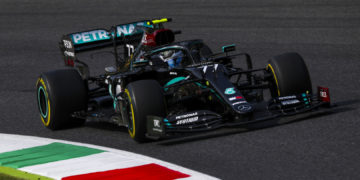 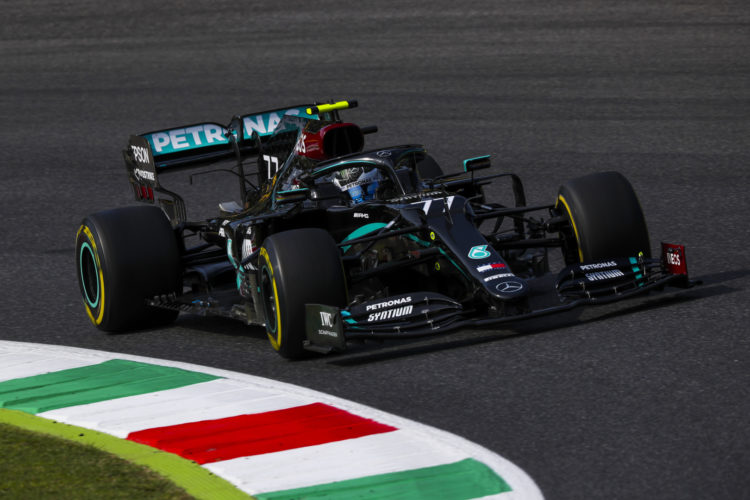 Valtteri Bottas has topped the times in second practice at Mugello, as Mercedes finished the day with the top positions. Bottas led Lewis Hamilton by 0.2 seconds at the end of the session, which was interrupted by two red flags.

The first, early in the session, was to cover Lando Norris. The McLaren driver lost control of his car when pushing too hard through Turn 3. Running wide, he lost the rear and speared into the wall on the outside of the corner and spun down the grass. He was uninjured but the session was briefly stopped to allow for the car’s recovery and to clean up the track.

With the Mercs out front, their closest challenger was Red Bull’s Max Verstappen. The Dutch driver finished less than half a tenth behind Hamilton and quarter of a second from the front. It was a case of Noah’s Ark at the front, with Merc leading ahead of Red Bull and Renault as Alex Albon claimed P4 ahead of Daniel Ricciardo and Esteban Ocon in P5 & P6.

Sergio Perez was P7 for Racing Point, and he has been called by the stewards to see them after the session. This was after the Mexican driver came out of the pits and hit the back of Kimi Raikkonen’s Alfa Romeo as the Finn flew past on a flying lap. Raikkonen was spun off into the gravel, and both will see the stewards to explain the incident this evening. Raikkonen finished in P9 with signs of encouragement for the Alfa team, while Pierre Gasly split the two with P8 in his Alpha Tauri.

Charles Leclerc finished in P10 for Ferrari, and was one of the drivers to spin off during the session as he lost control of the rear of his car going through Turn 12. Sebastian Vettel also spun off during the session as he lost control of his SF1000 through the final sector, but ended the session under a cloud as he suffered some sort of power unit issue. He was forced to stop on track and needed recovery as he wasn’t able to make it back to the pits. He finished in P12 and a tenth behind Leclerc, with the Ferraris split by Lance Stroll’s Racing Point.

Carlos Sainz ended the day in P13, ahead of Norris despite the other McLaren being out of the session. Daniil Kvyat finished in P15 for Alpha Tauri, with George Russell in P16 for Williams.