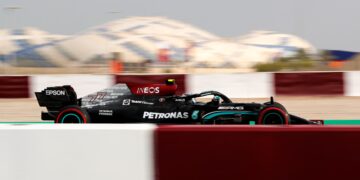 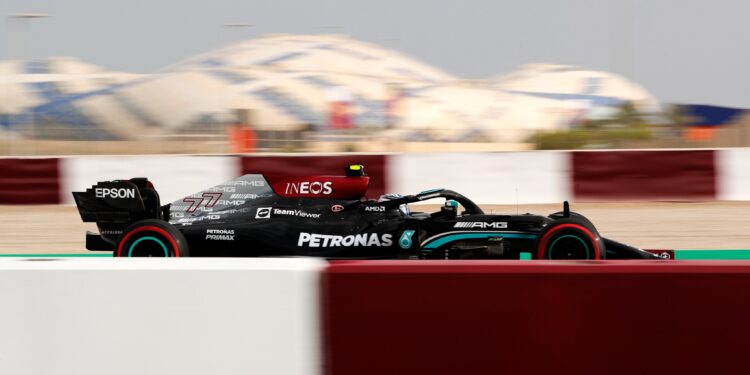 Bottas set a time of 1:22.310, which was narrowly quicker than his teammate behind in second place. Verstappen’s third place was nearly four tenths off the Mercedes cars.

After a very brief stoppage, the clock resumed with 55 minutes of the session remaining and drivers weren’t too keen to get out on track. The only driver to circulate was Haas teammate Mick Schumacher.

Bottas was the first of the front runners to set a lap time with a 1:24.019 which was immediately beaten by his teammate Hamilton. The Briton, who had struggled on Friday only managing fourth in both sessions, went just 0.069s faster than Bottas.

Fernando Alonso raised some eyebrows as the Alpine driver turned up the wick. The Spaniard set a 1:23.904 which was just half a second faster than Hamilton in second place. Teammate Esteban Ocon cemented some raw pace that Alpine demonstrated by going into fourth place, aided by a fastest first sector time.

Mercedes responded shortly afterward as Bottas set the timing screens alight with a 1:23.387 to go half a second clear up top. The time was still two tenths slower than the Finn’s best time from Free Practice Two on Friday.

Hamilton clocked in a new fastest lap as the track started to ramp up. The Mercedes driver set a 1:23.152, two tenths clear of his teammate. Perez had a better run shortly afterward to go into fourth fastest, but still six tenths off Hamilton’s time.

Championship leader Max Verstappen spent the first half hour of the session sitting in the garage, but mad his presence clear to go to the top of the timesheets with a 1:23.121. The Dutchman was just 0.031s faster than Hamilton’s best time.

The pendulum swung towards Hamilton who set a 1:22.655 to set the fastest time of the weekend so far. However, Bottas jumped up into top spot with a 1:22.573 to go just under a tenth clear of his teammate.

Verstappen was recalled to the pits after footage showed the rear wing on his Red Bull moving around, similar to what happened on Friday practice.

Meanwhile, Ferrari’s Charles Leclerc brought out a brief yellow flag period as the Monaco man lost the rear at Turn 2. Leclerc spun the car around into the gravel, but managed to get going again without damage.

With ten minutes to go, Hamilton set a new fastest lap with a 1:22.388 to go two tenths faster than Bottas. Perez had a better run too and get up into third place, a tenth up on his teammate Verstappen.

Bottas then clocking in a 1:22.310 to go top by just less than a tenth on his teammate Hamilton.

Pierre Gasly in the AlphaTauri set the fourth fastest time, ahead of Perez in the sister team in fifth. Sainz was in sixth, ahead of the two Alpine cars of Alonso and Ocon in seventh and eighth.

Leclerc was in ninth with Yuki Tsunoda in the AlphaTauri in 10th. It was a quiet day for McLaren with Daniel Ricciardo in 11th ahead of Sebastian Vettel in the Aston Martin. Lando Norris in the other McLaren was in 13th ahead of fellow countryman George Russell in 14th.

Lance Stroll was in 15th with the two Alfa Romeo cars of Kimi Raikkonen and Antonio Giovinazzi in 16th and 17th respectively.

Nicholas Latifi was in 18th for Williams ahead of Schumacher. Mazepin did not set a time after stopping early in the session