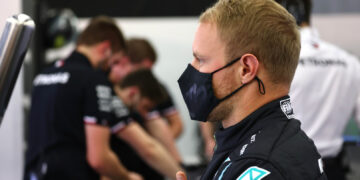 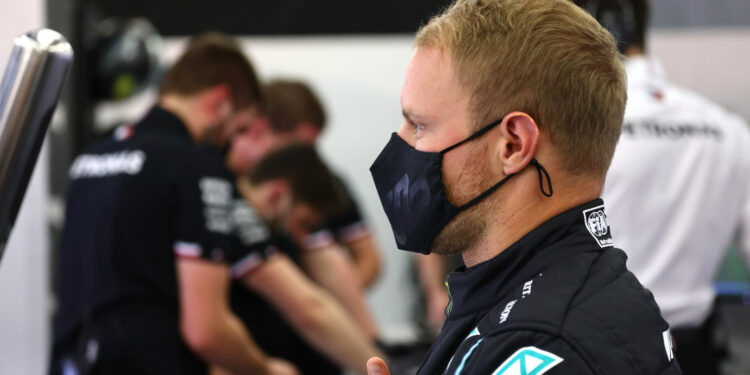 Bahrain Grand Prix – Valtteri Bottas was disappointed with the strategy he was given today saying that it was not the team’s usual attacking style.

After initially losing third to Charles Leclerc, Bottas never seemed to have the pace of the leading two cars. Heading into the second round of pit stops the Finn was initially told he would be running long in what looked like a split strategy from Mercedes to put pressure on Verstappen.

However, not long after that message Bottas was pitted and his front right didn’t come off easily so he was stuck in the pit box for eight seconds longer than he would have hoped to be. The Finn was not impressed by the strategy he was given, and felt it was unusually defensive from the team.

“Disappointing [race] for sure,” said Bottas. “Good thing as a team we got good points but from my side it felt like, at least for me and strategy-wise, that we were on the defensive side instead of attacking which I’m surprised by and it’s not quite normal, not ideal.

“We managed to have the two cars and that way we also had different tyre choice so we could really play with the strategy but I still think from my side there should’ve been more to get today.

“I knew that after the long pit stop, when you lose ten seconds or something like that, in a close battle against Max and Lewis, it’s going to be hard to regain that. Of course you don’t think about things negatively, you try to keep pushing and try to make the most out of the situation, but there wasn’t really many things happening, so it was a lonely race after that.”

After the messy pit stop Bottas never managed to catch back up to the fight for the lead and instead took a late third stop for fresh tyres so he could claim the fastest lap point. He felt it was a good day for the team however as a double podium was more than Mercedes were expecting after pre-season testing.

“As a team, if we were told in winter testing that we’re going to be two cars in the top three, one of them winning the race and getting more points than Red Bull, we definitely would have taken this. So as a team, strong performance overall.