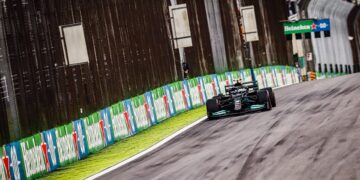 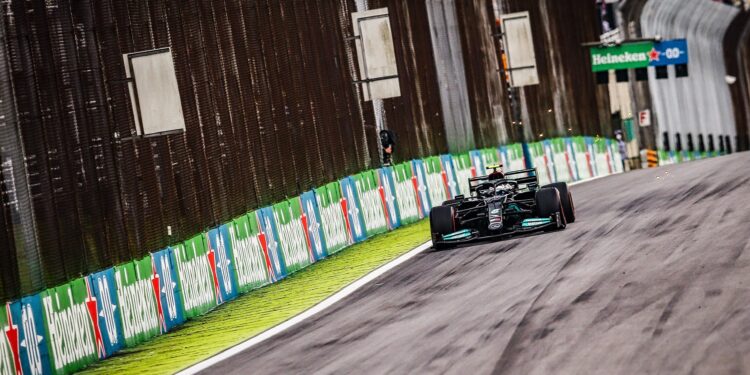 Bottas jumped into first place, powering past the Red Bull of Max Verstappen who started first on the grid. After a charge from the Red Bull, the Finn was able to see off Verstappen to claim pole position.

It was a disaster for Red Bull at the start as Bottas managed to jump Verstappen into first place into Turn 1. The Ferrari’s were looking quick too with Carlos Sainz getting into second place with the benefit of the grippier soft tyres.

At the end of Lap 1, Hamilton got up into 14th place whilst the two Alfa Romeo cars had a coming together into Turn 1. Kimi Rakkonen was the man who came off worse and dropped to the back of the field as he spun off the circuit.

On Lap 3, with DRS open, Verstappen snatched second back from Sainz into Turn 1 and set about getting after the Mercedes of Bottas up front. Further back, Hamilton started to make gains and got up into 12th place.

By Lap 6, Verstappen and Hamilton were trading fastest sectors, but it was the Briton who got the fastest lap of 1:12.357 which was a tenth faster than Verstappen’s best.

Sainz began to struggle on the soft tyres as a train started to form behind the Spaniard. Sergio Perez tried a move on Lap 7 but he couldn’t get his Red Bull past the Ferrari.

The pendulum swung towards Verstappen who set the fastest lap of a 1:12.187. But Hamilton was unable to dispose of Alpine’s Fernando Alonso. The Mercedes driver was stuck behind the two-time world champion until Hamilton managed to make a move on the Alpine by Lap 8.

On Lap 9, McLaren’s Lando Norris made a move on Leclerc who started to struggle on his soft tyres. The Briton got up into fifth place after a feisty battle through the Senna esses.

On Lap 10, Verstappen set a new fastest lap of the race and got the gap to Bottas down to just 1.5 seconds as he chased down the top spot for Sunday’s Grand Prix.

The progress up front seemed to have stalled by Lap 13 as Verstappen was stuck at 1.3 seconds behind Bottas in first. Hamilton managed to get into the top ten by overtaking McLaren’s Daniel Ricciardo and chased after Sebastian Vettel in the Aston Martin.

Verstappen picked up the pace on Lap 15 and started a charge after Bottas, dragging his Red Bull to within one second. Crucially the Dutchman got within DRS range of the Mercedes. Meanwhile, Hamilton got up into ninth place with a move on Vettel into Turn 1. The Briton immediately got the Alpine of Esteban Ocon a lap later and moved into eighth place.

On Lap 18, Hamilton’s charge wen unabated with a move on the AlphaTauri of Pierre Gasly. The Mercedes driver moved up to seventh place and into clear air. Verstappens charge up front stalled somewhat and dropped out of DRS range behind Bottas.

With four laps to go, Hamilton charged past Leclerc for sixth place. Further up front, Perez and Sainz locked horns, but the Mexican was unable to make a move stick and remained in fourth place.

Heading into the final lap and Verstappen got back to within DRS range of Bottas ahead, whilst Hamilton closed up to Norris in fifth place. The Mercedes driver dived down the inside of the McLaren at Turn 1 promoting Hamilton into the top five.

However, Verstappen was unable to overtake an impressive Bottas who finished first in the Sprint. Sainz was able to cling on to third, with Perez in fourth place. Hamilton crossed the line in fifth after a mammoth drive, but will start 10th for the race on Sunday.

Norris finished in sixth place, ahead of Leclerc in seventh. Gasly crossed the line in eighth with Ocon in ninth place, and Vettel rounded out the top ten.

Ricciardo was unable to make progress and finished in 11th place, with Alonso in 12th. Antonio Giovinazzi fared better than his teammate and crossed the line in 13th in his Alfa Romeo.

Aston Martin’s Lance Stroll finished in 14th place, ahead of AlphaTauri’s Yuki Tsunoda. George Russell was unable to get past his Williams teammate and finished in 17th, behind Nicholas Latifi. Mick Schumacher and Nikita Mazepin finished at the back of the field for Haas.