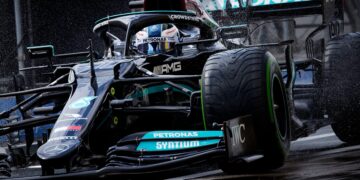 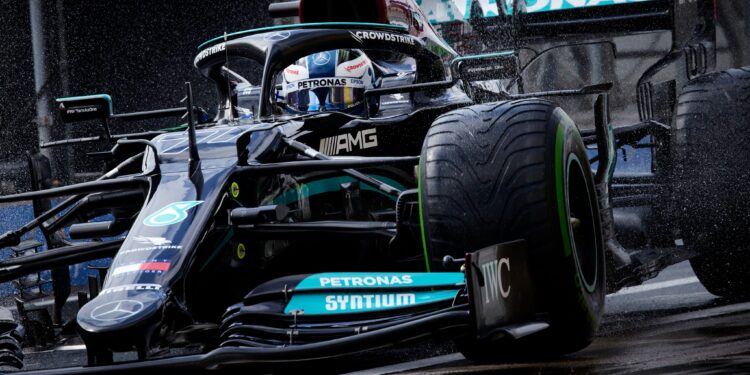 A wet start to the race saw the drivers play a waiting game for the conditions to improve. Mercedes Lewis Hamilton had looked set for a podium finish after holding on to his tyres for 50 laps. However, the team called him in as threats from Ferrari’s Charles Leclerc and AlphaTauri’s Pierre Gasly behind would have seen him drop down further.

Leclerc briefly led the race but had to come into the pits for fresh intermediates as the Monaco man was losing too much time. However nobody could touch Bottas as the Finn took a commanding win from Verstappen by 14 seconds.

Click here to view the race results from the Turkish GP

At the start, all drivers got off the line well, but on the run into Turn 1, Fernando Alonso was spun around in a spectacular 360 as AlphaTauri’s Pierre Gasly tapped the side of the Alpine. The Spaniard was able to keep going and didn’t collect another driver as they all charged down into Turn 2. The incident was investigated by the stewards who deemed Gasly at fault and slapped him with a five second time penatly.

Meanwhile, Hamilton, who took a grid penalty and started in 11th place, got up to ninth on the opening lap. But the Briton struggled to find a way past the AlphaTauri of Yuki Tsunoda and was stuck behind the Japanese driver for seven laps. Hamilton made a move around the outside of AlphaTauri at Turn 3 and set about going after Aston Martin’s Lance Stroll.

Alonso was also involved in another incident with Haas driver Mick Schumacher as the Alpine driver tagged the inside of the young German at Turn 1. The incident was immediately investigated by the stewards and elected to give Alonso a five-second time penalty for the incident.

On lap nine, Hamilton made a move on Stroll as Ferrari’s Carlos Sainz moved his was up to 11th place after a stellar start from 19th on the grid.

On Lap 11, Hamilton made further progress after passing McLaren’s Lando Norris and setting the fastest lap in the process. The lead up front had stalled a bit as Bottas kept Verstappen at bay by around two and a half seconds.

Another fastest lap from Hamilton on Lap 13 saw the Briton eat into Bottas’s lead. The Finn’s advantage was cut down to 17.5 seconds but he extended his lead over Verstappen to 3.5 seconds.

Hamilton managed to make a move on Gasly on Lap 15 bringing him up to fifth place. The lead up front was holding firm at three and a half seconds as the track started to dry with Hamilton setting the fastest lap a lap later.

Meanwhile, Sainz’s charge through the field stalled a bit as he encountered Tsunoda’s AlphaTauri. The Ferrari driver managed to make a move on the Japanese man on Lap 18.

Meanwhile, Verstappen found some pace by setting the fastest lap on Lap 18 and cut down Bottas’s lead to just over three seconds. Bottas responded immediately as the times yo-yoed between the two.

McLaren were the first to blink and brought Daniel Ricciardo in on Lap 22 donning a new set of intermediate tyres. The track hadn’t quite reached the crossover point to slicks yet as most of the field held station to try and keep hold of their existing rubber. However the gambled didn’t pay off as the Australian was slower on fresh rubber providing valuable information for the rest of the field.

Tsunoda’s impressive display was soured somewhat by a spin on some standing water at TUrn 9 dropping the Japanese driver down to 13th place.

Ricciardo’s pace improved by Lap 26 as the McLaren driver started to match the leaders for laptime. With more rain lingering in the air, the situation was causing some headaches on the various teams’ pitwalls.

On Lap 32, Alonso came into the pits for fresh intermediate tyres, and to serve his five second time penalty for the clash with Schumacher earlier in the race. The Spanish driver rejoined behind Ricciardo in 18th place.

On Lap 35, Hamilton and Perez engaged in battle. The Mercedes driver tried a move around the outside at the final few corners. Perez kept his line and the two had a drag race along the pit straight. Hamilton was unable to make the move stick and Perez held his position

Meanwhile, Lando Norris pitted his McLaren for fresh intermediate tyres on Lap 36, dropping the Briton down to ninth place behind ex-teammate Sainz.

Red Bull brought Verstappen in on Lap 37 dropping the Dutch driver down the third place. THis opened the flood gates for the rest with Sainz coming in immediately afterward. A slow stop for the Spanish driver saw him stop for 8.1 seconds. Interestingly, Hamilton elected not to come into the pits.

Bottas stopped a lap later dropping down into second place and giving the lead to Ferrari’s Charles Leclerc. Meanwhile Sebastian Vettel took a gamble and fit the medium tyres on his stop. However it didn’t work as the German could barely keep his Aston Martin on the road. Vettel eventually came back in for fresh intermediates.

Gasly came in for his stop and to serve his five second time penalty for the incident on Lap 1. The Frenchman came out in sixth place, just ahead of seventh place man Norris.

By Lap 43, both Leclerc and Hamilton still hadn’t come into the pits, with the Mercedes driver pleading to his team to keep him out.

Bottas eventually found a way past the Ferrari on Lap 47 and breezed past Leclerc on the back straight to take the lead from the Monaco man. Leclerc eventually came into the pits for fresh intermediate tyres dropping him down into fourth place. This promoted Hamilton into third place who still hadn’t stopped.

Hamilton came into the pits on Lap 51 for fresh intermediates dropping the Briton down to fifth place behind Gasly. With Leclerc quickly approaching him for third, and the threat of rain coming by the chequered flag, Mercedes had no choice but to bring the seven-time world champion in.

On Lap 52, Perez made a move on Leclerc for the final podium place but with the bit between his teeth, Hamilton started to make gains on Leclerc ahead.

With three laps to go, Hamilton entered the graining phase of the intermediate tyres which allowed Gasly and Norris to close in on behind.

Leclerc finished in in fourth place after briefly leading the race. Gasly crossed the line in sixth place, ahead of Norris behind. Sainz salvaged some good points for Ferrari by finishing in eighth after starting in 19th place.

Stroll came home in ninth place with Alpine’s Esteban Ocon being the only driver to not stop and scoring a valuable point for the French team in tenth.

The two Alfa Romeo cars of Antonio Giovinazzi and Kimi Raikkonen finished in 11th and 12th respectively, after passing Ricciardo late in the race. The Australian finished in 13th.

Tsunoda, who had a great start to the race eventually finished down in 14th place. Williams man George Russell finished in 15th, ahead of Alonso who was in the wars at the start of the Grand Prix.

Nicholas Latifi, who suffered an early spin, came home in 17th for Williams. Vettel eventually finished in 18th after the misjudged stop for slick tyres. The two Haas drivers of Mick Schumacher and Nikita Mazepin finished in 19th and 20th. There were no retirements.