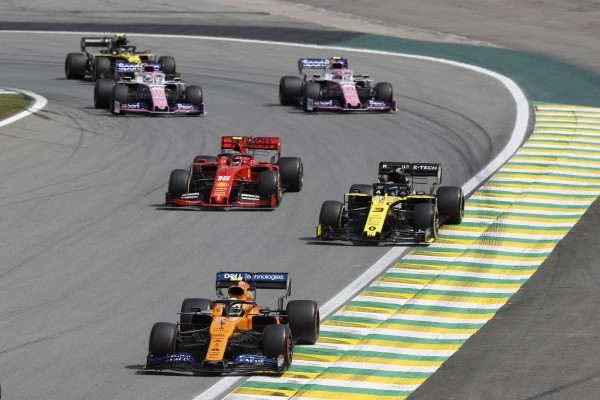 The last fifteen laps or so of the Brazilian Grand Prix proved to be a thriller, as the pack constantly got squeezed together under the Safety Car and on a variety of different tyre compounds.

When Valtteri Bottas retired from the race, Max Verstappen dived into the pits. Lewis Hamilton didn’t follow suit meaning that, when the race resumed, he was ripe for the picking and Verstappen quickly set about passing the Mercedes driver. This he achieved as the Safety Car withdrew. Despite Hamilton’s best efforts to catch the pack out with where he accelerated down the main straight, Verstappen was able to pass him around the outside of Turn 1 as the race restarted.

A few laps later, and the Safety Car was back out to cover the collision of the two Ferraris. Hamilton pitted this time, while Verstappen continued in the lead. Unwilling to give anyone behind him a tow down the straight, Verstappen drove slowly onto the grid before restarting – a very unusual restart procedure that resulted in a lot of scrapping as the green flag was shown again.

The high drama of the moment has caught the attention of Ross Brawn, who says he’s interested in exploring ways to recreate it through procedure in the future: “It was an exciting and fascinating re-start which will be analysed very carefully, as the closeness of the pack in the seconds leading up the green flags resulted in a thrilling spectacle as drivers jockeyed for position and where the slightest advantage proved decisive.”

“Examining the possibility of procedurally recreating those conditions in future is an interesting concept and one that will undoubtedly be explored in the coming period.”

Praising Verstappen’s nous to ensure he couldn’t be caught out when the race resumed, Brawn said: “His Red Bull was definitely the best package on the day but Max, too, was in superb form. He didn’t waver, he trusted the judgement of his engineers and strategists, and he delivered a winning drive of pace, power and precision.”

“He was particularly strong at the second re-start, when he slowed the field right down with the aim of ensuring no one would be able to slipstream past him and snatch victory.”