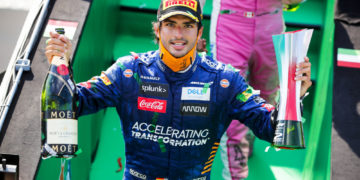 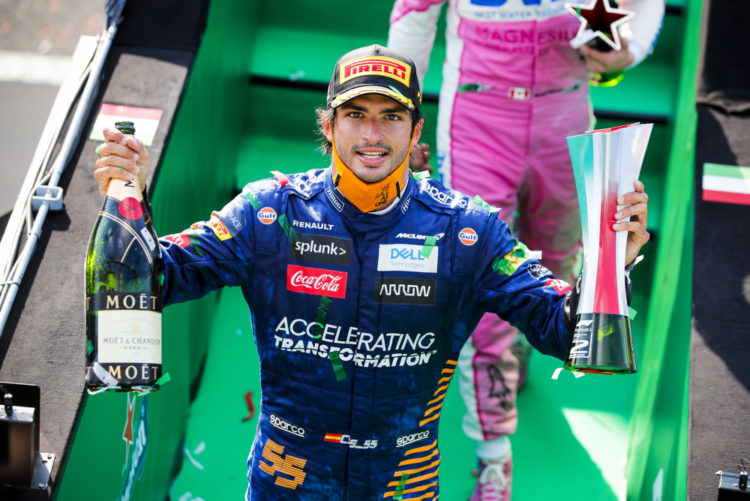 The Spaniard ran in P2 through most of Sunday’s race, vaulting up to that position on the opening lap of the first start to trail Mercedes’ Lewis Hamilton. He fell away to 13 seconds behind by the time of the mid-race stoppage, but lost out through the pitstop sequence once the pitlane opened just before the red flag period.

“It is incredible,” he said, after saying “I really want this win” over team radio in the closing laps. “I’m halfway disappointed with P2 as you would not believe. I had a chance to fight for victory today.”

“We were very, very close, but honestly with a normal race I think I would’ve been P2 behind Lewis because we had really, really good pace. So I think it is what we deserved.”

Sainz recovered to get back in front of Lance Stroll at the second standing start, but was beaten by Pierre Gasly into Turn 1 and was powerless to stop the French driver from taking the win.

“With Pierre there in front, it was like ‘woah, how could that happen?’ But I guess we had a bit of bad luck with the safety car,” he said.

“Then we did a good job to recover it after the red flag. I am very happy with P2 as we’ve been super quick all weekend and I feel like I could dominate the midfield pretty easily today. So I have to be happy with that.”

Sainz says that McLaren have a lot to feel proud of, despite just missing out on the win: “Getting back from P6 to P2 and then chasing Pierre and managing to finish three or four tenths behind at the flag, we need to be proud of that and proud of the pace of the car.”

“Without the red flag, I think I would have finished behind Lewis today but it is what it is.”