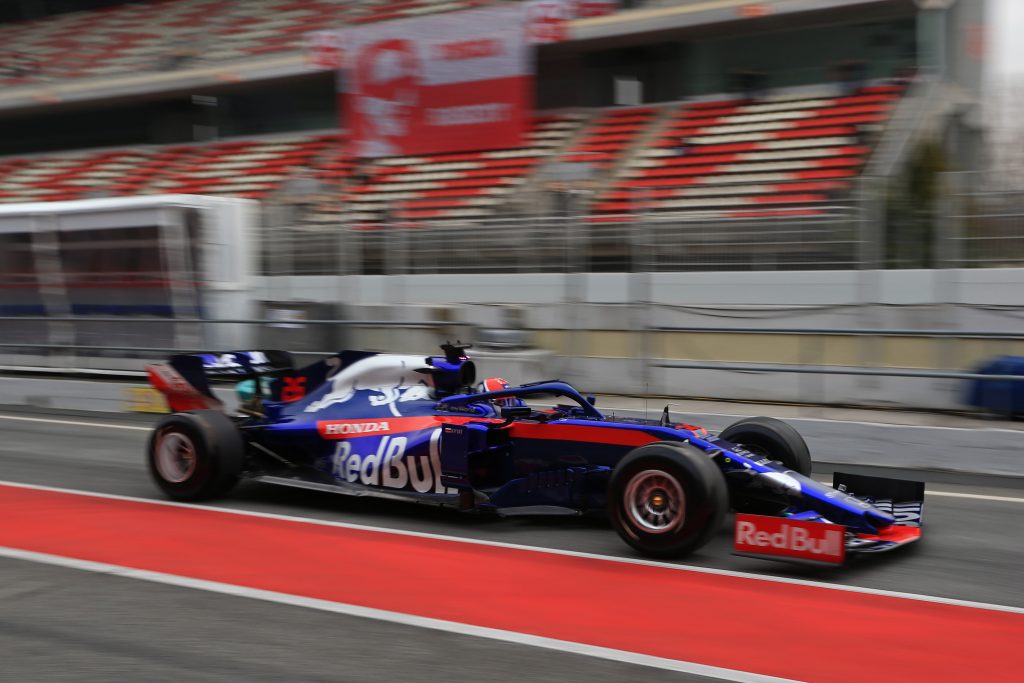 Toro Rosso’s Daniil Kvyat set the pace at the Circuit de Barcelona-Catalunya on Wednesday, with the Russian driver setting the quickest laptime of the test overall so far.

It was Toro Rosso at the forefront of the times on Wednesday, with Daniil Kvyat taking back over the STR14 from Alex Albon’s run on Tuesday. It was a quietly solid day overall for the team, with a minor scare midway through the afternoon when Kvyat had to roll into the pitlane with the engine off and needed pushing back to his garage, but he was quickly back out on track where he was able to improve his time to his eventual fastest lap. The Russian did 131 laps in total and a best time of 1:17.704 within the last ten minutes of track time. This, apart from being the best time of the day, was also the quickest time of the three days of testing overall. The time was set on the softest C5 tyre.

For the third day of pre-season testing, it was Kimi Raikkonen at the wheel of the Alfa C38 after Antonio Giovinazzi’s productive day on Tuesday. In what was another straightforward day for Alfa, they clocked up two full Grand Prix distances over the course of the eight hours of testing. Raikkonen was the first driver of 2019 to try out the softest compound C5 tyre for a fast run and he produced a 1:17.762 during the morning session. This time would remain unbeaten for most of the day, before Kvyat’s late run on the same tyre compound

While Vettel was in P2 for almost all of the day’s running, some last minute fast laps from other drivers knocked the Ferrari down to P4 by the chequered flag. Ferrari continued their strong winter testing program with another problem-free day. 1:18.350 on the C3 tyre was Vettel’s best effort. This, like Raikkonen, was set during the morning session. Putting in 80 laps over the morning, he did a further 54 laps in the afternoon and Ferrari completed their program with more than half an hour of the day remaining.

Renault’s Daniel Ricciardo was one of those last minute improvements with a late run on the C4 tyre. He put in a 1:18.164 to go P3 with 78 laps completed. This was just over a tenth clear of Vettel’s best time.

In P5 was Max Verstappen. After Red Bull Racing had a truncated afternoon on Tuesday with Pierre Gasly, the Dutch driver racked up 101 laps over the day to put in a best lap of 1:18.707 during the afternoon. This was set on the C3 tyre.

Nico Hulkenberg was P6 on the timesheets, but only took part in the morning session. He handed the Renault RS19 over to teammate Daniel Ricciardo for the afternoon.

Romain Grosjean was at the wheel of the Haas VF19 for the afternoon and, like test driver Pietro Fittipaldi in the morning, encountered an issue that resulted in him stopping on track. This turned out to be an ignition coil failure and, once the car was recovered, was fixed. Grosjean returned to the track and finished the day with 68 laps and a best time of 1:19.060 – enough for P7. He was also the cause of a late red flag as the car broke down yet again within sight of the chequered flag at the end of the day. Fittipaldi ended the day in P8 after a strong morning in the same car.

McLaren’s Carlos Sainz was P9. He had a lurid slide into the gravel in Sector 3 during the afternoon but finished with 90 laps completed and a best time of 1:19.354.

Sergio Perez was P10 in the Racing Point, ahead of the two Mercedes drivers. Valtteri bottas was ahead of Lewis Hamilton on the timing screens, with both drivers spending their day on long runs on the C3 tyre.

Meanwhile, right at the back, George Russell finally got to turn the wheel of the Williams FW42 as they showed up with their car and got it on track. Missing the morning session, he got out for some initial installation laps midway through the afternoon before slowly improving his pace. The best time for the car was a 1:25.625.