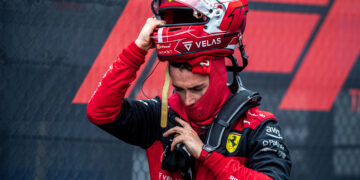 Disappointed Leclerc “tried too much” in his hunt for P2

Disappointed Leclerc “tried too much” in his hunt for P2 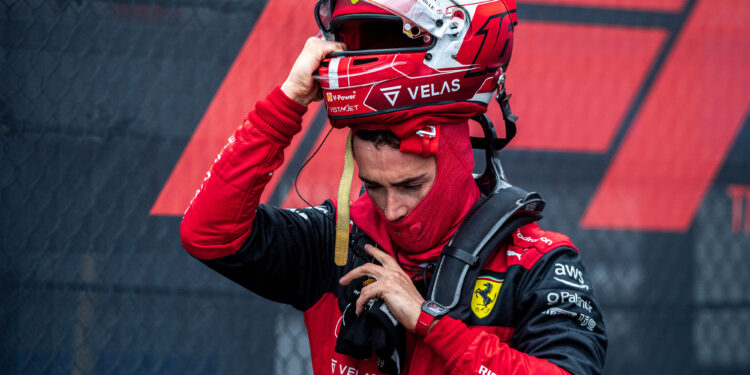 Emilia Romagna Grand Prix – Charles Leclerc’s late error while closing in on P2 saw him fall out of the podium positions and forfeit valuable points.

While Leclerc managed to convert P2 into the race lead at the start of the Sprint on Saturday, albeit aided by a slow getaway for Max Verstappen, Sunday however was a reverse in fortune as it was the Red Bulls who got the good starts and the Ferrari’s who fell back.

On Sunday Leclerc dropped from P2 to P4 by the first corner, and though he did make it back into the final podium position, the Red Bull pace was just too much for him to compete with.

Heading into the final thirteen laps of the Grand Prix, Ferrari pitted Leclerc to put on some new soft tyres, Red Bull followed suit and there was very little between Leclerc and second-placed Sergio Perez when the Red Bull driver emerged from the pits. The Monegasque saw a chance to move one place higher on the rostrum but pushed too hard, taking too much kerb at the chicane, which spun the car and he hit the wall.

Leclerc only lost one position by the time he’d got the car back on track but was called into the pits for a new front wing and tyres which dropped him to P9. He managed to fight back to P6 by the end but it was not not how Ferrari wanted the first of their home races to go.

“I’m disappointed in myself,” Leclerc said afterwards. “I tried too much obviously. There was an opportunity with Checo on that lap, I obviously wanted to give it all and gave it all in turn 14/15 and gave too much. Finished into the wall so, instead of the third place we lose seven potential points that will be important at the end of the season.

“Today it’s my full responsibility. I’m disappointed, I’ll look at what I’ve done wrong on that particular lap, the car jumped in a strange way but this is no excuse, this is just because I tried to put too much speed and lost the car.”

The Ferrari driver said that Red Bull were clearly the better car over the weekend but, as it has been over the four races so far, the advantage will continue to switch between the two teams over the course of the season and that means that limiting mistakes will be key.

“It is very, very close, and I think it will be that way for the rest of the season and that is why every small mistake…it’s a big mistake, but actually the consequence considering the mistake could have been much bigger.”