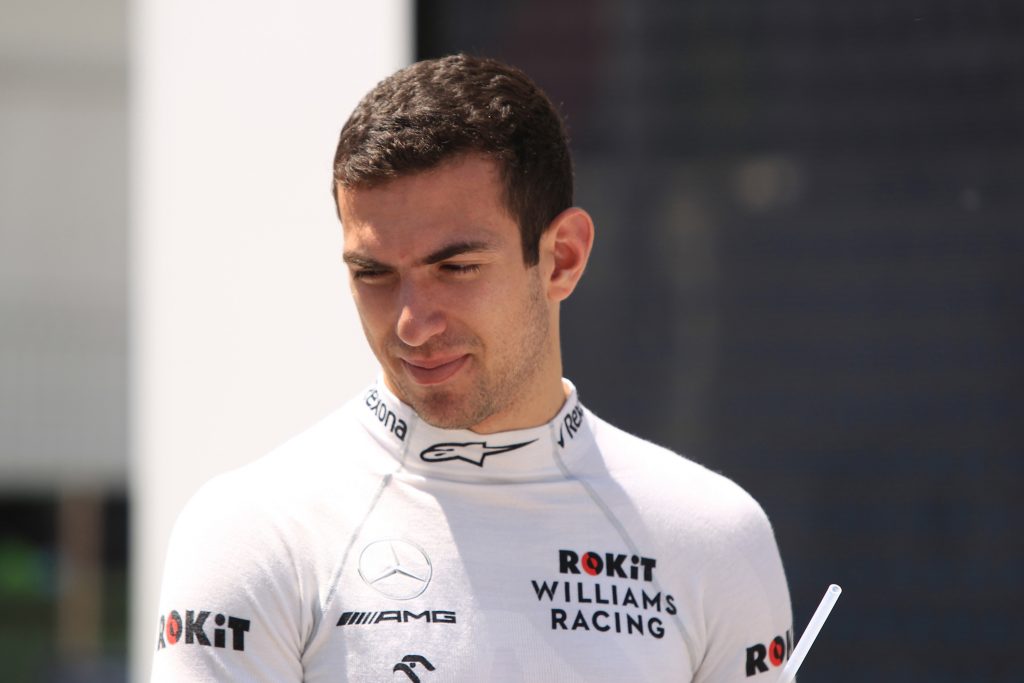 Exclusive: Nicholas Latifi on Formula 2, his Williams role and F1 2020

Exclusive: Nicholas Latifi on Formula 2, his Williams role and F1 2020

After a struggle in F2 in early 2018, DAMS’ Nicholas Latifi says adaptation has turned his fortunes around as he aims to make the F1 grid in 2020.

On the face of it, 2018 was a tough year for Nicholas Latifi. The gregarious Canadian finished the 2017 season with five podiums in the second half of the year, finishing P5 overall, but couldn’t replicate that form when the 2018 season started. To make matters worse, his DAMS teammate Alex Albon was a consistent frontrunner and eventually finished third in the championship. But, it wasn’t all bad news for Latifi. Serving as Force India’s reserve driver, he got to take part in a few FP1  and test sessions and, in the second half of the year, refound his mojo as he claimed victory in the Belgian Sprint race. He wound up P9 at the end of the year.

2019 has been a different story so far. Hitting the ground running, Latifi claimed three wins from the first five races along with three points finishes. Leading the championship comfortably heading to Monaco last weekend, a calamitous two races saw most of that lead eroded, but there’s no question that the 23 year old has finally unlocked the form needed to become a serious proposition for any F1 team. Speaking over the Monaco weekend, he explained what’s changed to see such a change in form and results: “2017 was actually a pretty good season for me, and I was in a good place with figuring out the tyres, how to drive the car and the team.”

But, the change of chassis and engine specifications for Formula 2 in 2018 essentially reset everything: “With the change for 2018 of car and engine and missing half of pre-season testing, I really struggled with how to get on top of the new car and how it needed to be driven. I think all my experience from the previous years actually played against me more than benefited me.”

“Knowing how the Pirelli tyres worked helped a bit but you see the top guys from GP3 transition over and they’ve no problem. So yeah, the prior experience did help a bit but the way you drove the 2017 car wasn’t at all how you drove the 2018 car. From a setup point of view, everything we learned and applied just didn’t seem to work so much in 2018. So I had to figure out a new way to drive. My teammate [Albon] was doing quite well but we had different driving styles and I was able to learn from him but it just took me a bit longer to kick everything out from the previous years and go “OK, this car isn’t going to be the way I want it to be, I’m not going to be able to drive it how I want and the way it’s instinctive for me to.”

“I needed to adapt to it and I’d say, from Budapest on, I started to make the changes and I got the Sprint race win, feature race podium and some great qualifying positions towards the end. The performance started to be there and this year was all about starting where I left off and hitting the ground running. I’ve been on a good path.”

With Force India going through turbulent financial times in 2018, they were bought out by a consortium led by fellow Canadian Lawrence Stroll, father of Lance. While they found their feet, Latifi switched to Williams Driver Academy and became a development and reserve driver for the Grove team. His first chance to drive the troublesome FW42 came at the Barcelona in-season test two weeks ago, where he drove the two full days and completed the team’s 2019 test programme. Latifi is confirmed as driving in six FP1 sessions this year, starting with the next event at his home race in Canada, and he says the chance to learn how the car worked proved invaluable: “The tests were positive for me, we did a lot of laps. That was great for personal development and getting more comfortable with the car.”

“Especially with my upcoming FP1s where you need to be able to jump straight into the car and be on the pace straight away. The tests were only my first two days in the car so it was just about allowing me to see what the car is capable of and getting used to its specific tendencies. On the program, the team were happy we got through all the major things and some new development things that it was pretty cool I could give my feedback on since I was the only one driving it. It’s important to give the correct feedback as that will set in motion how they run the car for the race drivers. The jump from an F2 car to an F1 car feels like a big jump – regardless of whether it’s a Mercedes or a Williams, it’s an impressive step in performance. Even if I’m getting more used to stepping in and out of F1 cars, I still think “Wow, this is awesome!”

“Canada last year was the first FP1 I did. Driving at my home Grand Prix was one of the coolest experiences of my racing career to date. A cool buzz to drive in front of family and friends. I’m looking forward to it again this year although, home race or not, it’s FP1 and the goal remains the same to try and get a good session and guide the team into a good place for the weekend. Not 100% sure but I think I’m driving Robert’s [Kubica] car.”

With the Polish driver not having a particularly strong start to 2019, media rumours regarding Williams potentially looking to get Kubica out of the car and putting Latifi in have already started to emerge. But, Latifi says he’s refusing to get distracted by them and, as far he’s concerned, it’s purely gossip and speculation: “They’re just rumours. For me, they’re just rumours. I don’t have my superlicence yet and my focus is solely on winning the Formula 2 Championship. It’s a bit unrealistic. If someone said to me “You have to drive”, then I guess I’d feel ready because I would have to drive. But I know I’m not in a position to be allowed to drive to begin with so from that point of view, it’s not even on my mind. All the rumours are just rumours. As far as I know and, in my opinion, nothing will happen with Williams this year. But, my goal is to arrive in Formula 1 as soon as possible.”

“I don’t have a contingency plan if that doesn’t happen. The goal is F1 and if, hypothetically, I win F2 this year I’d ideally like to arrive in Formula 1 next year and not have to take a year out like some previous Champions have had to do. I’m not thinking about it though – it’s Formula 1 and winning the Championship doesn’t mean it’s a guarantee that you go there. It’s timing, opportunity, luck. The goal is F1 2020, but we’ll have to wait and see what happens.”