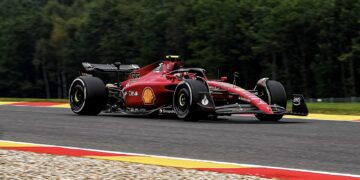 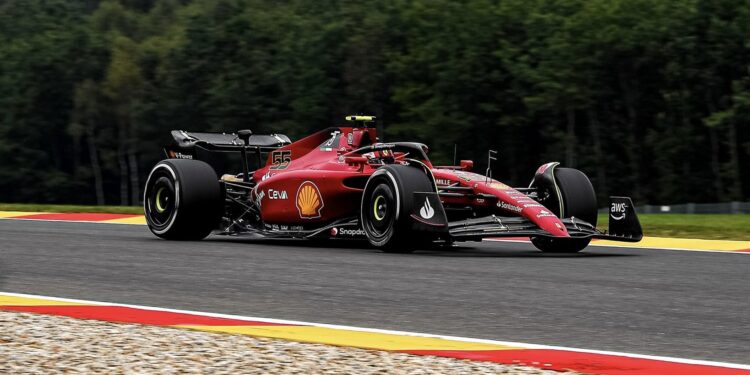 Belgian Grand Prix – Carlos Sainz and Charles Leclerc topped the times in Spa just before a Red Flag and then rain stopped any faster times.

While the rest of the weekend is forecasted to be dry, it was a damp, misty
Spa-Francorchamps that greeted the drivers as they headed out for their first laps after the summer break. The track will also be slightly different than what the drivers remember as there have been some changes around the place with new gravel traps and a reprofiled track around Eau Rouge and Raidillon.

As the track had been declared wet, all the cars headed out on intermediate tyres while there was damp in the air, the track seemed to be warm enough that the circuit itself was dry and so it was back to the pits at the end of the outlaps to swap over to dry tyres.

Carlos Sainz was the first to put a time on the board, a 1:51.622 on the hard compound, and with the first fifteen minutes of the session past it was the Red Bulls holding the top of the timesheet with Max Verstappen setting a 1:47.456 on the softs.

Valtteri Bottas didn’t have the best re-start to his season, the Finn only completing a couple of laps but not setting a time, before he headed back to the garage where he initially remained in the car while the Alfa Romeo team worked on his car but then got out as the issue did not look like a quick fix. The team were later seen taking the floor off and mopping up underneath so it looks like a leak was at least part of the problem.

Bottas wasn’t the only one to have issues though, Esteban Ocon had managed a few more laps than the Alfa Romeo but then radioed in with what he thought was a gearbox or diff issue and he also returned to the pitlane.

Halfway through the session Verstappen was still on top, though he had shaved his time down to a 1:46.755 while Alex Albon had put his Williams into P2, 1.357 seconds off the Dutchman’s effort and three tenths ahead of Lewis Hamilton.

The session was Red Flagged with just over twenty minutes on the clock as Kevin Magnussen stopped on track after turn 1. At that stage Sainz was back leading the times with a 1:46.538 while Charles Leclerc had just joined his teammate at the top, 0.069 seconds slower, before the session was paused.

The Haas recovery took some time as the red light on the roll hoop was flashing on the car, indicating that high voltage is running through the car and it could be very dangerous to touch. The team thought at that time that the High Voltage System was what caused the car to stop.

The session got back underway with nine minutes on the clock, and all but Magnussen, Ocon and Bottas took to the track again while drivers were warned that there might be rain on the way.

The rain did indeed make an appearance with about four minutes to go and that put pay to any faster laps being set. Sainz and Leclerc finished in P1 and P2 with their times set just before the Red Flag while Verstappen ended P3, 0.217 seconds behind.

George Russell was the best of the Mercedes with a 1:47.396 in P4 with Aston Martin’s Lance Stroll a few hundredths behind in P5. Albon’s earlier P2 time saw him end the session in P6 while Daniel Ricciardo was the only McLaren in the top ten with a 1:48.081 in P7.

Yuki Tsunoda was P8 for AlphaTauri while Lewis Hamilton was P9, just ahead of Sergio Perez in the second Red Bull. In his first F1 session, Liam Lawson completed fourteen laps for AlphaTauri and ended in P19 with a best time of a 1:52.065