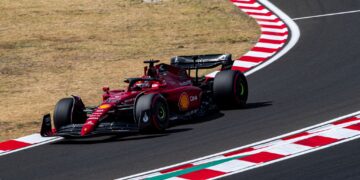 Ferrari top both practices with Leclerc leading Norris in FP2

Ferrari top both practices with Leclerc leading Norris in FP2 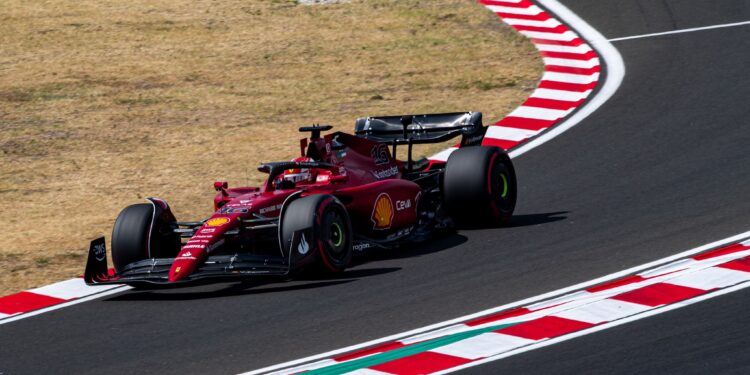 Hungarian Grand Prix – The Ferraris took P1 and P3 in both practices but in FP2 it was Charles Leclerc with the faster time while Lando Norris split the two.

The Aston Martins, with Sebastian Vettel who announced his retirement yesterday in the lead, were the first to take to the track for the second practice session but they both decided to head back to the pits before setting an opening time and so it was Kevin Magnussen who put the first time on the board, a 1:21.507.

That time though was quickly demoted and the first round of times ended with Ferrari on top with Charles Leclerc as the only driver into the 1:18s in the opening portion of the session having set a 1:18.911 on the mediums.

The track action took a pause after about fifteen minutes as drivers headed back to the pits to review and prepare for their soft tyre runs. The first yellow flag of the session appeared after twenty minutes when Alex Albon locked up and spun at the first corner and sat there for a couple of minutes before continuing, though he had destroyed his new soft tyres. As there were only two other cars on track at that point – George Russell who was ahead of him and the other Williams of Nicholas Latifi who headed out of the pits just after Albon spun – no one really got hampered by that incident other than Albon himself.

On the first of his red-walled tyre runs, Lando Norris jumped to the top of the times with a 1:18.662 despite going very wide at the final corner. The McLaren though didn’t hold P1 for long as Leclerc eclipsed the McLaren, with a 1:18.445, though he was a few tenths slower in the first sector.

With twenty minutes left of the session the long runs were being started while Leclerc and Norris’ times were still the best so far while Carlos Sainz, Max Verstappen and Daniel Ricciardo were the only others to make it into the 1:18s.

Despite sitting at the top of the times, things weren’t running smooth for Leclerc as he felt the torque was low when he was in fourth gear, Ferrari brought him back into the pits to get checked out and then as the Monegasque was trying to leave the garage he hit his front jack which was at the side of the garage entrance.

Verstappen was P4 for Red Bull while Ricciardo was the last to get within half a second of the lead Ferrari. Fernando Alonso’s 1:19.049 saw him as the lone Alpine in the top 10 with Vettel as the better of the Aston Martin’s, 0.808 seconds off Leclerc.

P8 to P10 were all within half a tenth of each other with Russell ended in P8 after setting a 1:19.355 while Sergio Perez was just 0.042 slower with Valtteri Bottas, who sat out FP1 while Robert Kubica completed the session in his car, set a 1:19.411.