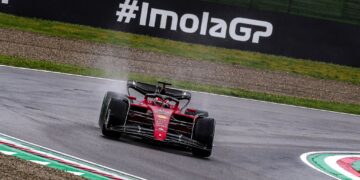 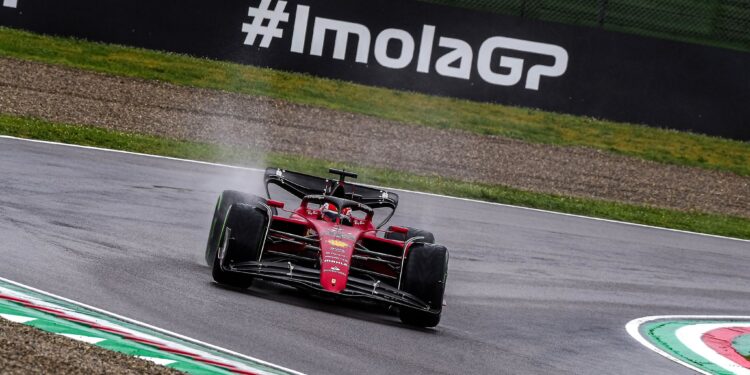 Emilia Romagna Grand Prix – Charles Leclerc and Carlos Sainz were well out ahead of the pack in FP1 as F1 returns to Europe.

The only free practice around the Autodromo Internazionale Enzo e Dino Ferrari ahead of this afternoon’s qualifying session on the first Sprint weekend of year was run on a very wet Italian circuit.

There was silence on track for the first few minutes of the session before Alfa Romeo’s Valtteri Bottas was the first to brave the cold and wet conditions. Spins and off-track ventures were rife as drivers found the limits in the low-grip conditions. Bottas was the first with a time on the board, a 1:43.277 and within ten minutes the times had come down and Max Verstappen’s 1:36.158 was at the top of the table.

With 35 minutes on the clock, Sergio Perez had shaved a bit more time off the target to beat with a 1:35.476, while at the same time Sebastian Vettel was the first to leave the wet tyres behind as he switched to the intermediates. After a couple of laps Vettel had moved his Aston Martin up from P15 to P5 with a 1:36.537.

Heading towards the final twenty minutes of practice and the green-ringed intermediate tyres were coming into their own with Perez’ earlier 1:35 time as the only one in the top five not set on wet tyres. Lando Norris had gotten close, just 0.026 seconds off but it was Carlos Sainz, with his newly extended Ferrari contract, who demoted the wets from the top of the table with a 1:33.716, over a second and a half better than Perez.

The two Ferraris traded times and over the next few laps, with both pushing the limits and going slightly over it on occasions, but as the session entered the final ten minutes it was the Spaniard with the advantage, a 1:30.279 compared to Charles Leclerc’s 1:32.056.

The first red flag of the session came out with 5 minutes on the clock as Norris was in the gravel however the flag was flown slightly prematurely as the McLaren driver was able to roll back out of the trap and return to the pits without any assistance. The track went green again with three minutes left to run.

Prior to the red, Leclerc had slipped under the 90 second mark with a 1:29.402, a time that wouldn’t be bettered for the remainder of the session. Sainz ended P2 with Verstappen’s best time almost a second and a half off the leading Ferrari.

The two Haas cars were P4 and P5, Kevin Magnussen’s 1:32.439 half a second quicker than Mick Schumacher. Perez ended P6, 3.610 seconds behind Leclerc while Fernando Alonso was P7.

Vettel ended the session P8 with a 1:33.365 while Yuki Tsunoda and George Russell rounded out the top ten for AlphaTauri and Mercedes. Lewis Hamilton struggled to get his tyres into working temperatures and ended P18, just over seven seconds off the Ferrari pace.

There was a luck escape for Bottas as the practice ended, the Finn lost the rear of his car and went spinning into the gravel but the Alfa Romeo stopped just as the front wing was about to make contact with the barriers.