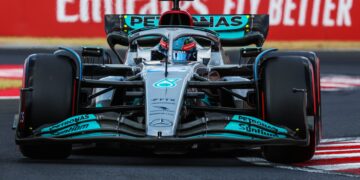 First pole for Russell as he beats the Ferraris in Hungary

First pole for Russell as he beats the Ferraris in Hungary 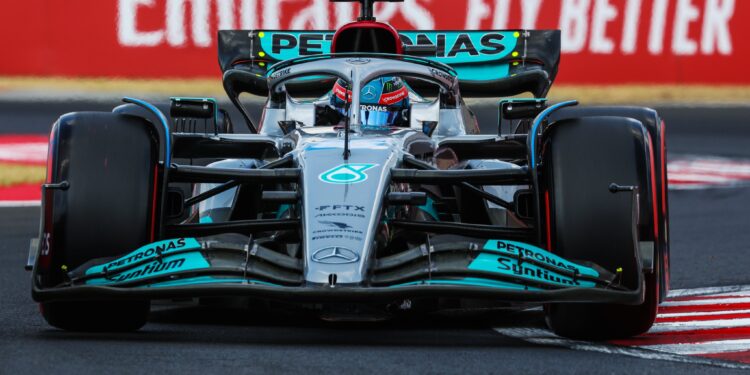 Hungarian Grand Prix – George Russell secured his first pole position as he beat the Ferraris while Max Verstappen had power issues in Q3.

After the wet and then drying conditions in FP3 which saw Williams display some fantastic pace with Nicholas Latifi beating Charles Leclerc to P1 at the end while the Canadian’s teammate, Alex Albon, took P3. Qualifying however started with a dry track however there were some very dark clouds looming overhead.

As the lights went green for the qualifying session, Aston Martin had done great work on Sebastian Vettel’s car to get it repaired, after he crashed near the end of FP3 bringing out the red flag for a few minutes, which allowed the German to get out at the start of Q1.

The first time on the board was a 1:20.388 by Kevin Magnussen but over a second was soon shaved off that that time with Max Verstappen sitting at the top of the times with a 1:19.020 before he dropped into the 1:18s, with a 1:18.792, just before the clock ticked into the final ten minutes of Q1.

Lando Norris was a couple of tenths further back but split the two Red Bulls at the top of the times. While Verstappen continued improving at the front, the Ferraris and Mercedes jumped them and so it was Verstappen ahead of Sainz as the time ticked down to the final five minutes.

At the back Zhou Guanyu, Latifi, Vettel, Yuki Tsunoda, and Mick Schumacher who were in the drop zone but the healing into the final minute all but Tsunoda had managed to find time, with Zhou jumping jumping into P6 as the Mercedes cars, which were not happy in the damp conditions earlier, found their pace much easier in the dry to go 1-2 as the chequered flag came out.

While Zhou and Schumacher’s efforts saved them unfortunately for the Williams cars, after such a great FP3, both Latifi and Albon won’t progress and apologised for mistakes on their final attempts. Neither AlphaTauri will continue on either having had times deleted for track limits. Vettel also missed out and will be starting P18.

Magnussen was once again the first to put in a time in the session with a 1:19.378 though the times soon ducked under seventy eight seconds with Verstappen setting a 1:17.703 to go over four tenths faster than Norris, who has been showing good pace so far this weekend.

With five minutes left on the clock Verstappen and Alonso were at the top while the elimination positions were occupied by Carlos Sainz, Lance Stroll, Magnussen, Schumacher and Sergio Perez, who was without a time as his initial effort had been deleted due to track limits. Though it was then reinstated which brought him up from P15 to the loft heights of P9 but the Mexican was in the pits for the final minutes of the session having not set another time.

The Red Bull driver was joined by Zhou, Magnussen, Stroll and Schumacher, as Sainz had moved up to P4, behind Verstappen, Leclerc and Alonso.

There wasn’t a rush to the track as the top ten shootout started but once one car made the move, all others followed. Esteban Ocon’s 1:18.890 was the first time logged but he was demoted well back once the others got their banker in and it was Sainz at the top of the pile with a 1:17.505 with George Russell P2, while Verstappen could only manage P7 as there was no grip for him on that lap.

The track then emptied again before the final runs and Ocon was the first back out with just less than three and a half minutes to go. The reigning champion’s problems continued into his final run as he reported that he had “no power” and the suggestions given to him by his engineer didn’t solve the issue.

While Sainz did improve slightly as did Leclerc, and it was looking like an all-Ferrari front row until Russell, who was able to get everything in place, managed to snatch his first ever pole with a 1:17.377.

Norris slotted into P4 with a 1:17.769 while the Alpines will take over row three with Ocon starting ahead of Alonso. Last year’s teammates, Hamilton and Bottas will share row four after the Mercedes driver had DRS issues and abandoned his final attempt. The top ten was rounded out by Daniel Ricciardo and Verstappen, who didn’t manage to solve his power issues.