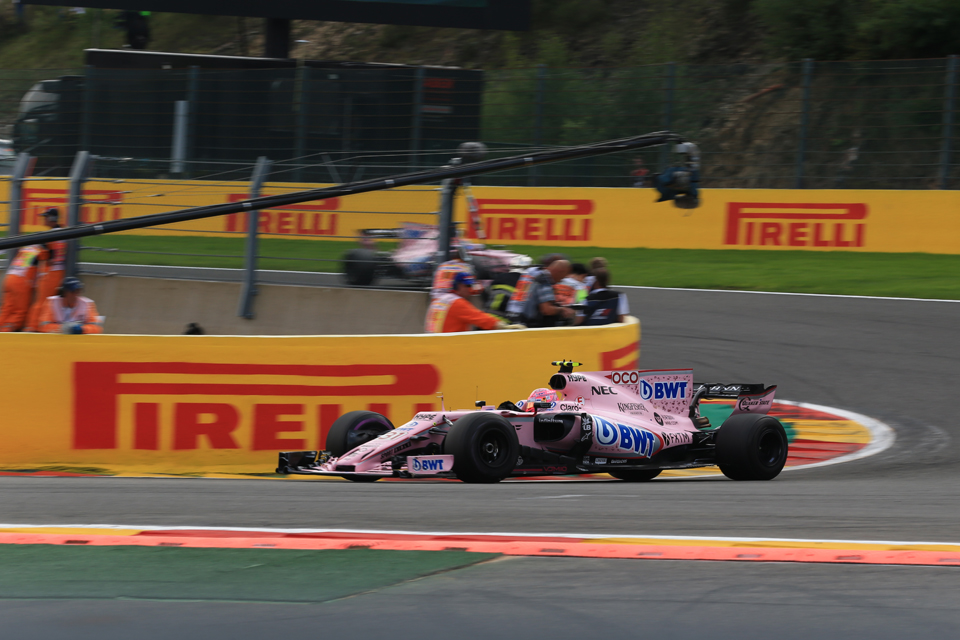 The pair made contact on the approach to Eau Rouge on the opening lap of the race, with Perez running Ocon out of room as they ran close to the concrete wall.

Neither car was damaged and they proceeded to fight for points. However, they were racing each other once again in the later stages of the race.

This time, with no other cars around them, Ocon was again alongside Perez on the run to Eau Rouge. Perez refused to yield the racing line and squeezed Ocon towards the wall. The two touched, giving Perez a puncture and damaging Ocon’s front wing.

The safety car was brought out to clear the debris and Perez eventually retired from the race. Ocon was able to fight back to claim two points for ninth place.

With the incident costing Force India championship points, team principal Vijay Mallya admitted that now the team would have no choice but to enforce team orders for the rest of the season.

“I have been very happy with our overall performance during the 2017 season with both drivers scoring points for the team and racing freely,” said Mallya.

“However, as much as I support competitive racing, the repeated incidents between both our cars are now becoming very concerning. Under these circumstances I have no choice but to implement a policy of team orders in the interest of safety and to protect the team’s position in the constructors’ championship.”

“This is what you get when you have two very competitive drivers who are fairly equal in performance in a decent car. It has happened to others in the past and it is happening to us now,” said Szafnauer.

“However, we cannot afford to see this in the future, so we will ensure the team controls what happens on the track. We gave our drivers the chance to sort it out by themselves, but if they cannot do it, we will have to put some more rules in place and take the situation in our control.

“It’s disappointing to lose so many points when we had the pace to finish well with both cars.”

The results of the Belgian Grand Prix mean that Force India’s hold on fourth place in the constructors’ championship has been reduced slightly to 58 points.