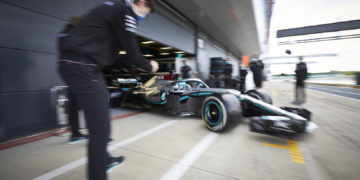 Formula 1 returns to the track as Mercedes test at Silverstone

Formula 1 returns to the track as Mercedes test at Silverstone 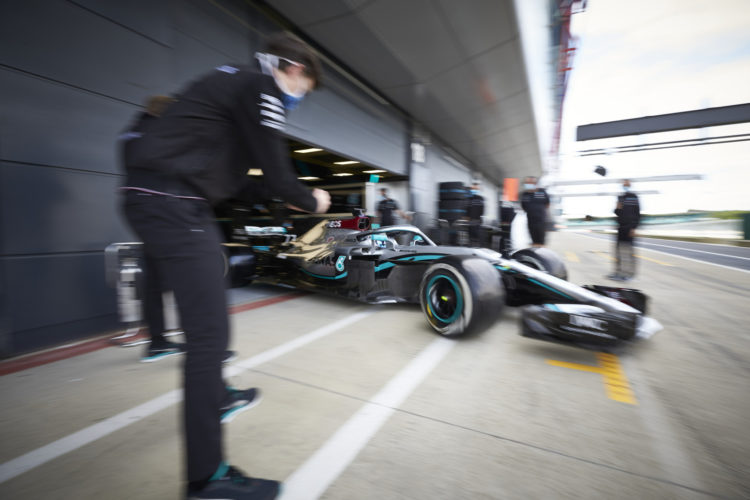 Formula 1 has returned to the track for the first time since pre-season testing, as Mercedes carried out a shakedown in a 2018 car at Silverstone.

Mercedes were the first team to return to a race track since Formula 1 left the Circuit de Barcelona-Catalunya at the end of pre-season testing at the start of March. The Brackley-based team headed up the road to Silverstone on Tuesday to carry out a ‘protocol run-through’, with Valtteri Bottas at the wheel of the 2018 W09.

This consisted of practicing social distancing, garage positioning and safe procedures for the drivers and team members in the garage. While Bottas hid in his helmet, the rest of the team wore face masks for protection against any possible threat of the spread of COVID-19.

With Formula 1 scheduled to return to racing behind closed doors at the Austrian Grand Prix next month, Mercedes took the opportunity to shake off some rust by carrying out the test with the 2018 car – the current rules permit teams to carry out private track testing with two year old cars.

The health and safety of our team is our top priority, which is why we’re testing out our protocols today at Silverstone 💪

Every team member present today has tested negative for Covid-19.

The cars must run specific tyres and aerodynamic blocks on the cars sides, with the cars not permitted to use any components of newer specification than the season it competed in. Lewis Hamilton will take the wheel of the W09 on Wednesday.

Mercedes are unlikely to be the only team to use a permitted way to blow off the cobwebs. Ferrari are likely to carry out a similar test with Charles Leclerc and Sebastian Vettel at their track in Mugello, while Red Bull are also expected to head to Silverstone before packing for Austria.

Formula 1 hasn’t raced since the season finale in Abu Dhabi more than six months ago, with just six days of pre-season track testing taking place since.