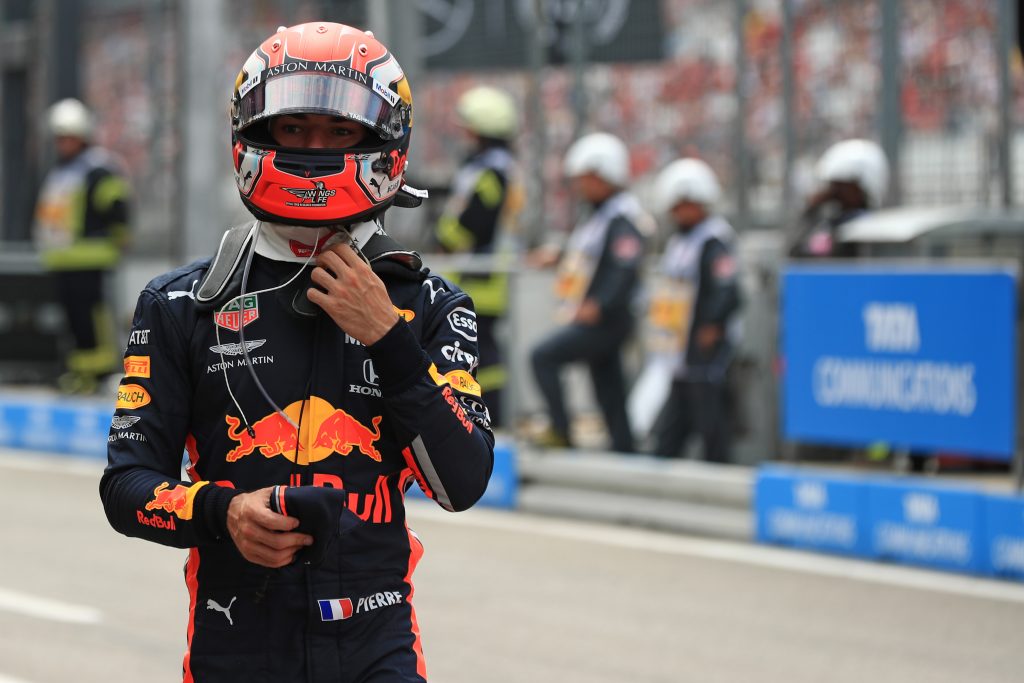 German Grand Prix – Red Bull Racing’s Pierre Gasly got away without penalty for hitting the back of Alex Albon’s Toro Rosso towards the end of the Hockenheim race.

The Red Bull driver had been embroiled in a late race battle with his Toro Rosso stablemate Alex Albon over P6, with the pair swapping places on several occasions as the track dried out.

However, with just three laps to go, Gasly tried to slingshot past the Toro Rosso as the pair accelerated away from the hairpin. Misjudging the moment to pull out of Albon’s slipstream, Gasly made contact with the back of the Toro Rosso and damaged his car. With his front left tyre rubber crying enough after the contact, Gasly had to pull off the track and retire. Albon was able to continue and finished the race in P6.

“That was an insane, crazy race and it just had everything.” said Gasly afterwards. “With the rain, crashes, safety cars and pit stops, it was a lottery and there were a lot of opportunities so I’m quite disappointed not to have made the most of it on my side and not finish the race.”

Speaking about the incident, he explained: “Towards the end, I was fighting with Alex during the last few laps and we made contact, which took my front wing off and gave me a puncture, so I had to stop the car. I don’t know what to say but it’s annoying not to score points when you have a race like this.”

The stewards did investigate the clash, but declined taking any further action against Gasly as he hadn’t disadvantaged anyone but himself.

Gasly had visibly struggled for pace and traction throughout the race, with several off track moments in the early stages of the race as he fell down the order on the full Wet tyres. He explained: “At the start, I had wheel spin so I was slow off the line and I lost a lot of positions into Turn One so it was quite hectic from there. In these conditions, it’s a gamble when to pit and when not to and sometimes you just need to get lucky but the pace was there so we will keep pushing and next week, we go again in Hungary.”

Team boss Christian Horner didn’t criticise Gasly’s driving after the race, instead diplomatically explaining that he felt the error with Albon was just a racing incident: “For Pierre, it was a shame as he had sections of the race that were going really well for him and it looked like he would finish in the top five, but it wasn’t to be. He had an incident with Albon late in the race which I’ve only briefly seen, but thankfully both of them were unhurt and Pierre will bounce back.”