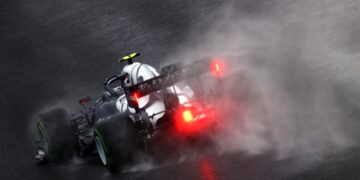 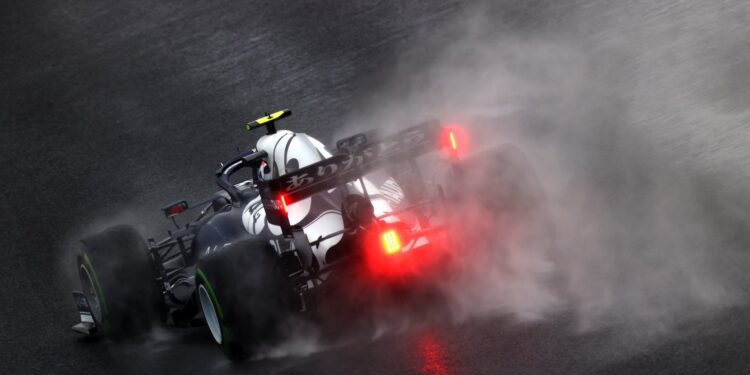 AlphaTauri’s Pierre Gasly has set the fastest time at the rain affected final practice ahead of the Turkish GP.

The Frenchman set a time of 1:30.447 which was faster than the sister Red Bull cars of Max Verstsappen and Sergio Perez in second and third.

Click here to view the full results from FP3

After a downpour of rain prior to the session, all drivers tip-toed around the Istanbul Park circuit using full wets. Just ten cars, set competitive laptimes, with the bigger teams, including Red Bull and Mercedes, choosing to wait out the weather.

The session was red flagged at the half way point due to Williams’ George Russell beaching his car on the exit of Turn 2. The Briton lost his car over the kerbs and spun into the gravel trap. With the Williams driver unable to get back onto the track, the stewards brought out the red flags to recover the car.

With the car recovered quickly, the session resumed and the drivers elected to switch to the intermediate tyres as the standing water cleared. However spins from Verstappen, Sebastian Vettel, and Nikita Mazepin showed that the track was still very slippery.

The Ferrari cars of Carlos Sainz and Charles Leclerc, both with their upgraded powerunits, were in fourth and fifth ahead of the Alpine of Fernando Alonso in sixth.

Kimi Raikkonen set the seventh fastest time in the Alfa Romeo, ahead of the other AlphaTauri car of Yuki Tsunoda in eighth.

Valtteri Bottas was the quickest Mercedes in ninth, ahead of Esteban Ocon in tenth for Alpine.

Antonio Giovinazzi set the 11th fastest time with Vettel in 12th for Aston Martin. Mick Schumacher was in 13th for Haas, ahead of both McLarens of Daniel Ricciardo and Lando Norris.

Aston Martin’s Lance Stroll was in 16th, ahead of Mazepin in the Haas. Lewis Hamilton, who only set five laps, was down in 18th for Mercedes, with Nicholas Latifi in 19th for Williams. Russell in the other Williams was 20th after not setting a time.