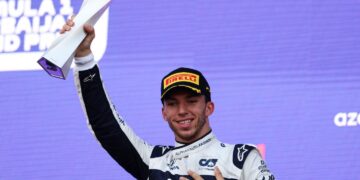 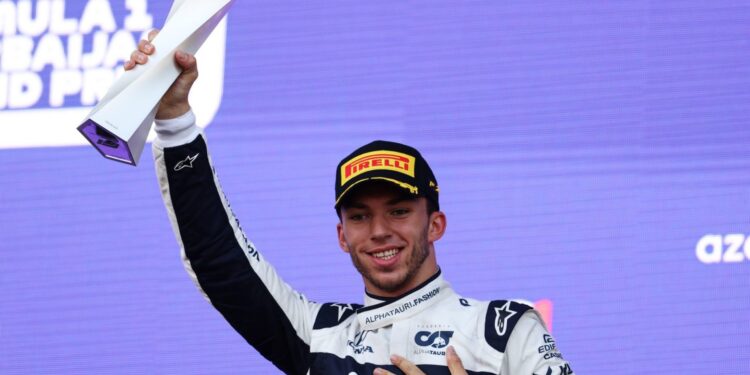 Gasly had been one of the standouts of the weekend even before the Grand Prix. The Frenchman was on the pace in both of Friday’s sessions, went fastest in FP3 and even found himself in the running for pole on Saturday afternoon.

“Incredible,” Gasly said post-race. “Honestly I don’t really know what to say. It was such an insane race and super intense last two laps. The car has been incredible all weekend and every session we were there. Qualifying was mega, I didn’t know if we could keep up that position or fight for even a podium and in the end we did it. I’ve finished once first, once second and I’d missed that third place, so it feels incredible to get that podium.”

Starting fourth Gasly lost out at the start to eventual race winner, Sergio Perez. Later the AlphaTauri driver suffered an engine issue, which persisted until the end, causing him to lose power on the long Baku straights.

Aside from that, prior the red flag it had been quite a quiet race for the Frenchman, only gaining places from the misfortunes ahead and being passed by Vettel. The final laps after the restart however were a very different story with Gasly and Leclerc putting on a fantastic fight for the final podium position.

After the chequered flag, an almost disbelieving Gasly came on the team radio saying “: Guys, I don’t know how I did that. Wow. No idea how I’ve done that. Incredible guys. I’m so happy for you. Really had to fight hard for that one.”

Talking about it in his post-race interview, Gasly said “We had to get the elbows out. It was a very difficult race from mid race onwards with an engine issue, so we were losing quite a lot of power down the straights and Seb managed to pass us in the middle of the race.

“I knew these last two laps were going to be very difficult with Charles behind. And you know I tried it, every braking I wasn’t sure if I was going to stop the car but I had to go for it. I really wanted that podium and it just feels incredible after such a good weekend.

“Some really good points and I’m very happy Yuki did a good race as well, so all in all, a fantastic job and hopefully we can celebrate all together tonight.”