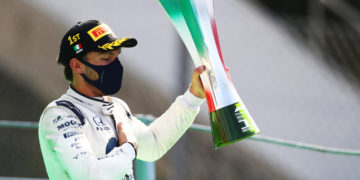 Gasly thinks he’s ready for a return to Red Bull

Gasly thinks he’s ready for a return to Red Bull 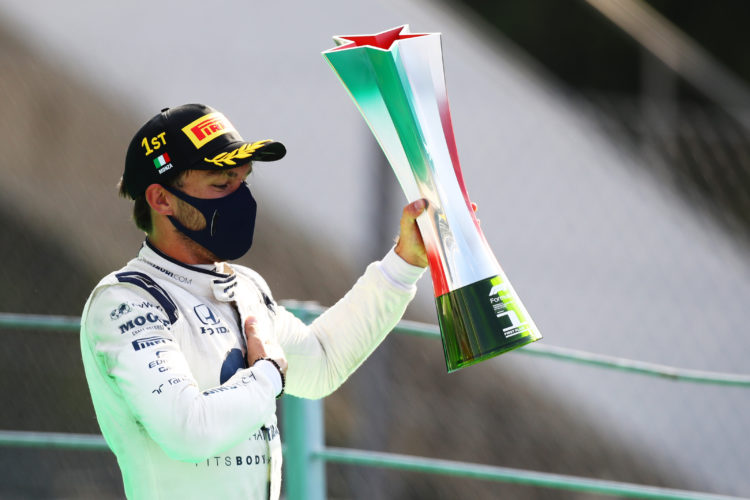 Italian Grand Prix – Pierre Gasly says he thinks he should be rewarded with a return to Red Bull Racing after winning for Alpha Tauri at Monza.

Pierre Gasly became the sport’s latest first-time winner by claiming victory at Monza on Sunday, coming home first in his Alpha Tauri to emulate Sebastian Vettel’s victory at the same venue in 2008 when the team were known as Toro Rosso.

Gasly’s win capitalised on a circumstantial red flag period, but there was no luck involved in his perfect control of the gap back to the attacking McLaren of Carlos Sainz. Gasly crossed the line just 0.4 seconds clear of Sainz to claim his first win, the team’s second, and the first win for a French driver since Oliver Panis won at Monaco in his Ligier Mugen-Honda in 1996.

Gasly’s performances throughout 2020 have been eye catching, as he’s been a consistent high points scorer and is achieving results that would normally be expected of a driver for the senior Red Bull team. Inevitably, Gasly was asked about whether he thinks he should be moved back to the team in place of the struggling Alex Albon to reclaim the position he was demoted from just over a year ago.

“I think I’m ready but as I said, it’s not up to me to make that call.” said Gasly. “The only thing I’ve done since they moved me back to Toro Rosso has been just to focus on myself and just show what I can do. When I get the right tools in my hand I’m really happy that the performance we’ve shown – and I’m not only talking about Brazil (Gasly claimed P2 at Interlagos ’19) but I think generally, we’ve been pretty strong most of the time.”

“We’ve had some really strong qualifyings, really strong races since.” continued Gasly. “We’ll see what happens but I think there have been many, many strong drivers in Toro Rosso. I’m really happy to be one of the two that have managed to get a win for this team. Obviously I guess the strong results should be rewarded with something but we will see what happens. At the moment it’s not something I really want to think about. I just want to enjoy this moment, because it’s my first win in F1 and I will have time to think about this later.”

Gasly had a tough run last year, struggling for any semblance of performance at Red Bull Racing alongside Max Verstappen. Anonymous in the midfield, he was demoted back to Toro Rosso in favour of Alex Albon. Immediately following this setback in his professional life, Gasly suffered enormous personal loss with close friend Anthoine Hubert losing his life in a Formula 2 accident at Spa-Francorchamps.

Gasly’s redemption arc since that time is now complete, with the French driver reaching the top step of the podium, and he says it’s been a lot of self reflection to get back to the right mental state: “That was a purely a tough moment last year. I grew up with four brothers and I think, like personally, as a child, I had to work through quite difficult moments, which built me a pretty strong character and I always had to fight for everything I wanted.”

“I always, in some way, managed to turn that negative energy into something positive and I knew last year what happened, deep inside me, obviously I felt hurt and I didn’t feel it was fair to myself and I really wanted to make a clear point in that moment but look, I know I’m fast, I know what I can do, I know I can believe, I’ve been fighting for victories, for pole, championships in my early years, in my career and that’s what I want in F1.”

Gasly says that even if he stays at the junior team, he couldn’t be happier with the environment and equipment he’s being given: “I really worked very hard with the team and I knew that with them I had everything in my hands to show my potential. After, I just tried to focus on my own performance, not really looking at the others, taking race after race, looking at what I can improved on my side, what I can improve with the team, with my engineers, just to extract more from myself and more from that package and combination and yeah, honestly I can’t be happier with the team I have at the moment.”

“They are doing an amazing job; they are giving me everything I need to be competitive every single weekend. Sometimes we are fast enough for the top eight, sometimes for top ten, sometimes top twelve but at the end of the day, they really put all the energy for my own performance which I really appreciate and I’m really thankful for because thanks to that, today gave us my first race win in Formula 1.”