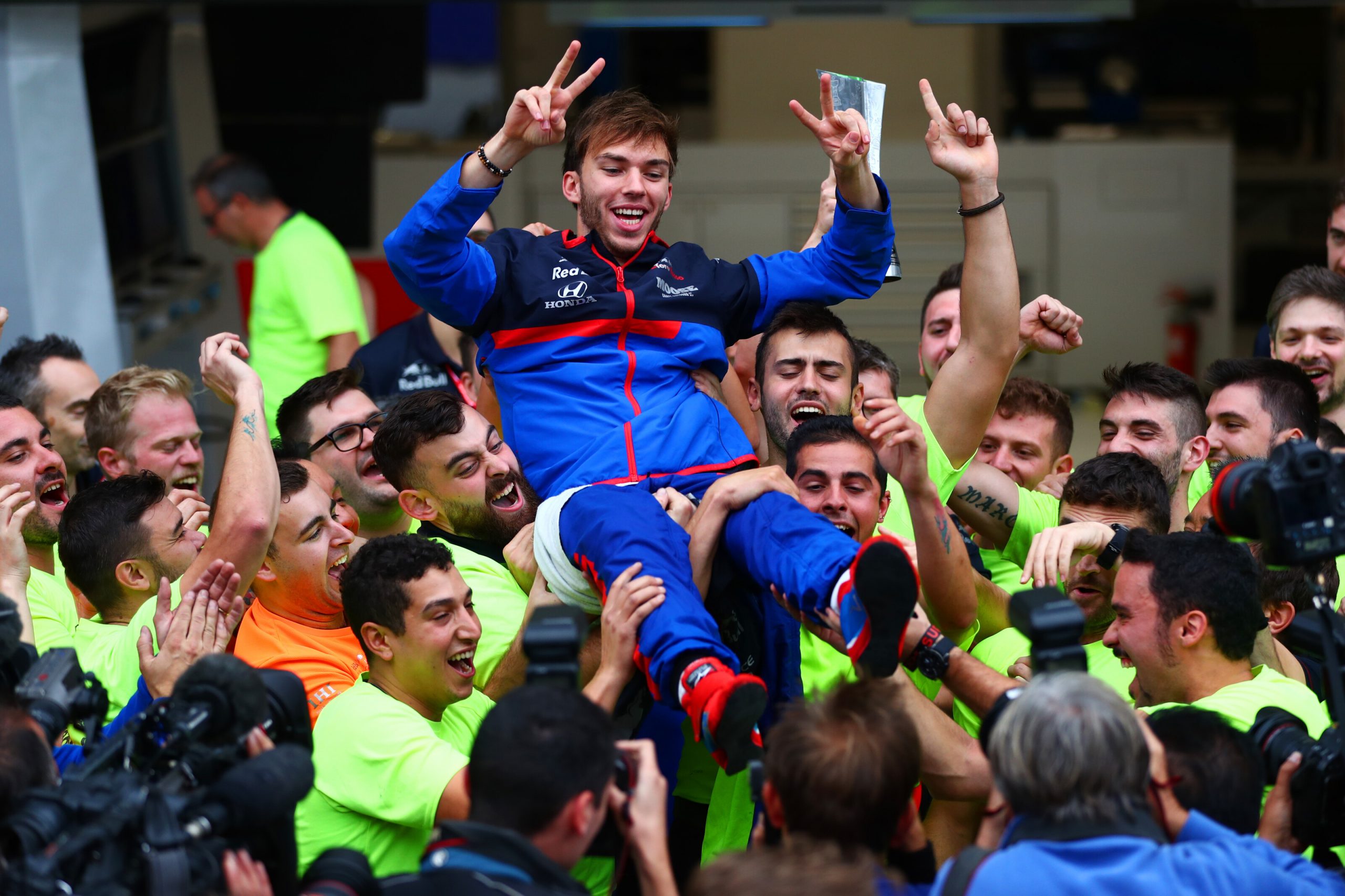 Brazilian Grand Prix – Toro Rosso’s Pierre Gasly said he used an old karting trick as he demanded every single bit of power in his sprint to the chequered flag.

Pierre Gasly claimed his maiden podium finish in Formula 1 in Sunday’s Brazilian Grand Prix. The Frenchman had worked his way up the order through a straightforward two stop strategy, and stayed out on track in favour of track position as the chaotic circumstances of the closing laps played out. Moving up to P3 behind the Red Bull drivers and ahead of Merc’s Lewis Hamilton, Gasly was in P4 when Hamilton made contact with Alex Albon. Gasly quickly drove past Hamilton as the World Champion regrouped and, a lap later, emerged from the last corner side by side with the Mercedes driver in a drag race to the chequered flag.

Who would've predicted THIS drag race before the race?!#BrazilGP 🇧🇷 #F1 pic.twitter.com/slz2SdEcxt

Powering up the hill side by side, Gasly just about managed to keep Hamilton at bay as his Honda power unit just edged him clear in the final metres. Screaming down the team radio in delight, Gasly’s joy comes at the end of what has been a miserable 2019. Initially driving for Red Bull at the start of the season, he was demoted back to Toro Rosso after the summer break on the back of poor performances. In his first weekend driving for Toro Rosso at the Belgian Grand Prix, Gasly’s close friend Anthoine Hubert passed away after a crash in Formula 2.

Overjoyed by his moment of triumph, Gasly explained that he’d even employed an old karting trick of ducking down in the cockpit as he bid to keep Hamilton behind in their drag race.

“Intense!” was Gasly’s description of the race end. “You see your first podium coming together and then you’ve got the World Champion behind you pushing you to the limit. I tried to defend the best way I could, and coming out of the last corner, just flat out and hoping that the engine can give you every single horsepower it can get. I was pressing the overtake button, trying to get low inside the cockpit and I could see his front wing and I was like: ‘please don’t pass me on the light’ ‘cos I’m going to be so pissed off if it happens!”

“I really wanted to keep that second place. And yeah, I must say Honda have been improving so much over the last few months. And then yeah, without this progress it would never have been possible to hold that second place to a Mercedes. Just insane. I think the only thing we have to say is a big congrats and a big thank you to Honda today.”

Gasly’s P2 behind Max Verstappen meant a Honda 1-2 with two different teams, and Gasly said the result, as well as the evidence of their power against Mercedes, is a strong salute to Honda after a few years in the doldrums.

“I think all the work, not only this season but since they came back into Formula One, they have had some tough times and they just kept developing, kept working hard and bringing the upgrades, some things worked, some other things didn’t work but at the end of the day, they are the ones who have improved the most.” Gasly explained. “The attitude and the work they are putting in is just unbelievable and they have been supporting me since quite a few years now, since I was in Super Formula and to be part of the journey with them is just fantastic so today I think I am really happy to be P1 and P2 with Max and really happy we can give them this result.”

WOOOOW, 2nd!!!!!!
I’m just lost for words… simply incredible day!! Just wanna THANKS each single person that helped and supported me since day 1 to live this moment and emotions, best day of my life. Thinking about you Anthoine, that one is for you my friend. ❤️ pic.twitter.com/ML8e8Ht0pR