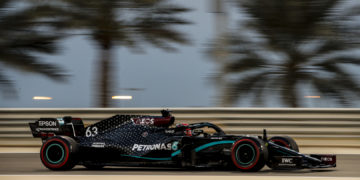 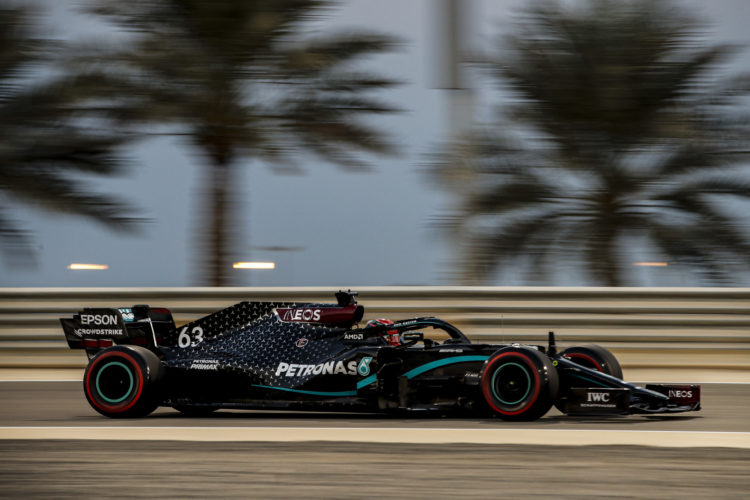 Sakhir Grand Prix – George Russell has won the first round of battle between the Mercedes teammates by going quickest in the first practice session in Bahrain.

George Russell, in his first session for Mercedes, has gone quickest at the Sakhir Circuit in Bahrain. The British driver, filling in for Lewis Hamilton, got straight down to business in the W11. Putting in a few sighter laps at the start of the session, Russell took over at the top with a 55.0 second lap ahead of Bottas.

With the majority of the drivers pushing on the Soft compound, Max Verstappen lowered the benchmark to 54.8 for Red Bull Racing.

Shortly after, Russell emerged again on a fresh set of Softs and did a 54.5 second lap to go fastest. This time went unbeaten for the remainder of the session. Valtteri Bottas, by contrast, appeared uncomfortable in his Mercedes. Initially quickest, he was unable to match Russell’s pace and had a few scruffy flying laps. Complaining about locking brakes, he could only manage P4 and 0.3 behind Russell’s time.

The two Mercs were separated by the two Red Bull drivers. Max Verstappen placed P2 and 0.176 behind Russell, with Alex Albon a combative P3 less than a tenth behind his teammate.

Alpha Tauri were up next, with Daniil Kvyat in P5 and Pierre Gasly in P6. The French driver had an interesting moment early in the session, when his right wing mirror broke free of its mounting. He returned to the pits slowly, holding onto the mirror with one hand.

Esteban Ocon finished in P7 for Renault, 0.7 off the pace set by Russell. Sebastian Vettel was P8 for Ferrari, 0.008 behind Ocon, while Daniel Ricciardo was another tenth behind for Renault. Charles Leclerc rounded out the top ten in his Ferrari.