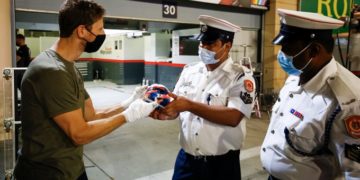 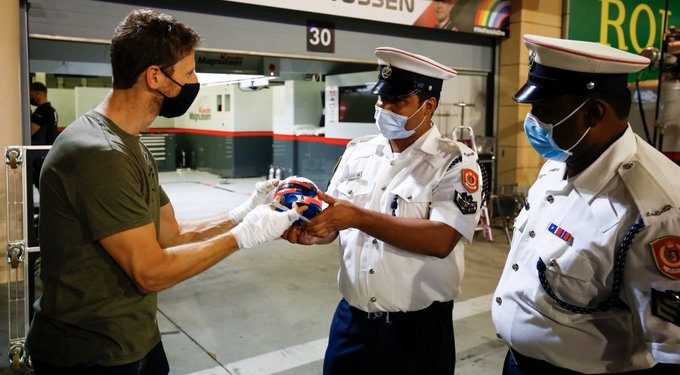 Sakhir Grand Prix – Haas’ Romain Grosjean returned to the paddock on Thursday, hugging and thanking the people who helped rescue him last weekend.

Grosjean returned to the F1 paddock on Thursday, dropping by the Sakhir Circuit just a day after being discharged from hospital. The Haas driver suffered injuries in a horrific crash last Sunday, one which he was lucky to emerge from relatively unscathed.

Still wearing bandages on his hands as they recover from minor burns, Grosjean came by the circuit accompanied by his wife Marion who flew in specifically to be with her husband this weekend.

Grosjean spent time meeting with and thanking all the medical crews and track marshals that were involved in the incident and helped him escape the fireball and to safety. Medical Car crew Alan Van Der Merwe and Dr. Ian Roberts posed for pictures with the Haas driver, while Grosjean met with firefighting track marshals Joby Mathew and Thaer Ali Taher. He hugged them and presented them with gifts as he outright told them they saved his life.

Speaking about the crash with French TV, Grosjean said: “I said to myself, “My F1 career can’t end like this. I told myself that I had to get out of there for my kids. I was more scared for my immediate family, my children first of all.”

“Because they’re my biggest source of pride and energy, than for myself. I think there’ll be some psychological work to do because I saw death coming. It was almost like a rebirth and coming out of the flames that day is something that will mark my life forever.”

Grosjean has been buoyant on social media ever since his accident, taking pictures with his wife as they experience the relief of his survival.

Kevin Magnussen, who visited his teammate in hospital and met up with him for lunch on Wednesday after Grosjean got out of hospital, spoke at the press conference and said: “His spirit is incredible, what he’s been through. He’s very positive and reflective on the whole thing and seems pretty strong about it.”

“I went to see him on Sunday, just a few hours after he escaped from those scenes and already immediately he was talking about wanting to get back in the car so I just have to take my hat off to him.”

Grosjean is sitting out this weekend’s Sakhir Grand Prix, with rookie Pietro Fittipaldi taking his place. He’s in a race against time to be ready and fit for the season finale in Abu Dhabi next weekend, where he will bow out of F1 with no seat for 2021.

The FIA have launched a full investigation into Grosjean’s crash, with the intent being to investigate every single bit of available data to help with learning and understanding what went wrong. This data allows the FIA to consider ways to improve safety further in its never ending pursuit of reducing danger and risk.