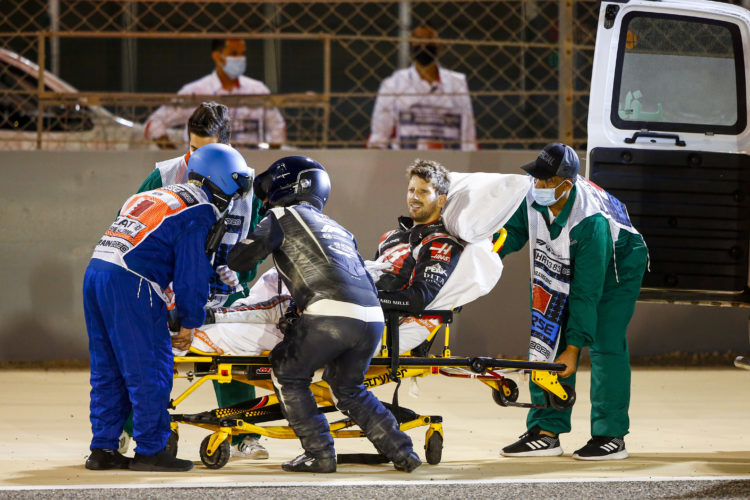 Sakhir Grand Prix – Haas’ Romain Grosjean says he subconsciously felt at peace with mortality as he went through his crash in Bahrain.Having returned to the paddock on Thursday to thank his rescuers and meet up with the medical staff from Formula 1, Romain Grosjean has given several in-depth interviews discussing his traumatic experience.

Grosjean is being extremely candid about the details of the crash, and spoke to media on Friday morning where he explained his crash in minute detail. Grosjean admitted that there was a moment during the 28 seconds it took for him to escape the crash, that he subconsciously made peace with his looming death.

Crashing at high speed into the barriers exiting Turn 3, Grosjean said he wasn’t initially aware his car was on fire:

“When the car came to a stop I opened my eyes and undid my seat belt straight away.I jumped up and I felt like something is touching my head so I sit back down in the car. And my first thought was ‘I’m going to wait’. I’m upside down against the wall, so I’m going to wait that someone comes and helps me. So I wasn’t in stress and obviously not aware at the time there is fire.”

“I looked right and left, and on the left I see fire. So I said ‘OK, I don’t really have the time to wait here’. I decided to turn my helmet on the left-hand side and to go up and try to twist my shoulder. That sort of works, but then I realise my foot is stuck in the car. So I sit back down, pull as hard as I can on the left leg. The shoe stayed where my foot was, but my foot came out of the shoe. And then I do it again and then the shoulders are going through. At the time the shoulders are through I know I’m going to jump out so I’ve got both hands in the fire at the time.”

Grosjean explained that he could see his hands were particularly vulnerable to the flames, saying “My gloves are red, normally, so I see especially the left one changing colour and starting melting and going full black. I feel the pain, that my hands are in the fire. But also I feel the relief that I am out of the car. And then I jump out, I go on the barrier.”

Speaking to Sky Sports, Grosjean said he felt death looming, and momentarily almost accepted it: “I tried to go up a bit more on the right, it doesn’t work. I go again on the left, it doesn’t work. So I sit back down and then thought about Niki Lauda, his accident. I thought, it couldn’t end like this. It couldn’t be my last race, couldn’t finish like this. No way. So I try again and I’m stuck so I go back. And then there’s the less pleasant moment where my body start to relax, I’m in peace with myself and I’m going to die.”

“I guess it was milliseconds at the time. Then I think about my kids. And I said no, they cannot lose their dad today.”

Having managed to free himself from the car, Grosjean was helped over the barrier by a track marshal blasting an extinguisher at the flames. This allowed FIA doctor Ian Roberts to grab him and help get him clear of the blaze.

“I feel pulling on my overalls. So I know I am not on my own any more, there’s someone with me. Then I land and then they like touch on my back so I’m like ‘oh, shit, I’m like a running fireball’.

“The image, we’ve seen a video from the FIA, they did a test, they put someone one fire and he runs around just to show the overalls were strong. I’ve got that image, I’ve got fire following me. Then I shake my hands because they’re very hot and pain. I removed my gloves straight away. I’ve got also that image that the skin is like going bubbles and melting and it’s going to stick to the gloves so straight away I want to remove both of my gloves so the skin doesn’t go with it.”

“They put a cold compress on my hand because I told them my hands are burnt, my foot is broken. And then the pain really starts going very high. Especially on the left foot – the hands were OK at the time, the left foot starts being very painful.”

Grosjean revealed that he had the option of being stretchered away, but chose to walk away to ensure the enduring image of the crash was one of him sending a clear message of survival.

“I guess on the medical side, it wasn’t a perfect decision, but they understood that for me, it was key at the point that there was some footage of me walking towards the ambulance. Even though I’d walk out of the fire, I needed to send another strong message that I was OK and I was going to walk towards the ambulance.”