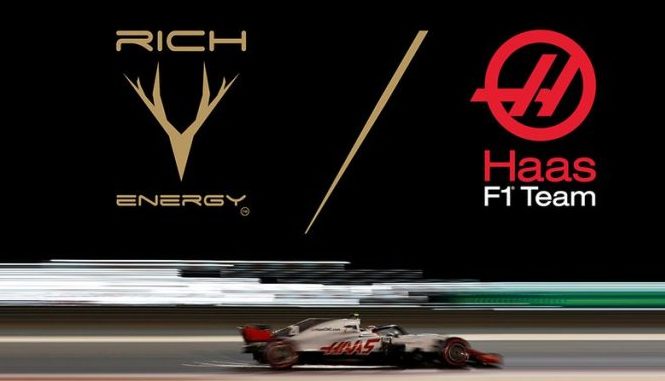 Mexican Grand Prix – Haas have sprung from the shadows and signed Rich Energy as a title sponsor in a multi-year deal.

Rich Energy have been flirting around Formula 1 for around a year now, with the most recent links being a supposed buy-out attempt of the Force India team as well as CEO William Storey being spotted on the United States Grand Prix grid with Claire Williams.

However, Haas have surprised everyone by signing a multi-year title sponsorship deal that will see the team renamed Rich Energy Haas F1 Team from 2019. This will result in a major livery change to reflect the colours of Rich Energy, who market themselves with a black and gold colour scheme.

Rich Energy are a UK-based energy drinks company, concentrating on low sugar content drinks to go up against the likes of Rockstar, Red Bull & Monster.

Team boss Guenther Steiner said of the signing: “Securing a title partner in Rich Energy is another milestone moment in the development of Haas F1 Team,” said Guenther Steiner, Team Principal, Haas F1 Team. “We welcome their commitment to us as an organization, and together we share an ambition to advance further in our respective fields. It’s going to be exciting for us as a team to be the focal point of Rich Energy’s marketing endeavors, as we go into both new and existing consumer markets around the world in Formula One. As we have seen already this season, our own continued push for performance has delivered on-track, and I have no doubt that the platform we provide for Rich Energy will translate into equally favorable dividends.”

Part of the reason for the surprise regarding the signing is that the company, which formally came into existence in 2015, filed financial accounts last year that don’t suggest the means to be able to become a Formula 1 title sponsor.